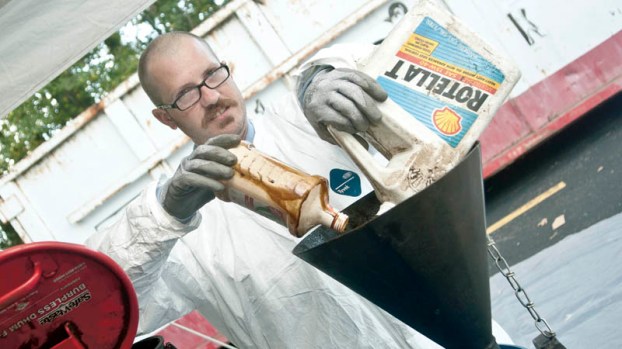 Lawrence and Scioto county residents seeking to dispose of hazardous items may do so at an event scheduled for Sept. 24.

“We’ve held it at Dow in the past, because of the excellent location and the ability to move cars in and out,” he said.

Palmer said those dropping off will not need to unload their vehicles and that community court workers will take the items as vehicles pull in.

Tires will be accepted, he said, but they will be limited to 10 per dropoff.

In addition, crews will be collecting electronic waste, such as computers, monitors, keyboards, scanners and cell phones.

Palmer said this year’s event, as in years past, will have a deputy from Lawrence Sheriff Jeff Lawless’ office on hand to collect unwanted pharmaceuticals and prescription drugs.

“The old adage was to flush them, but you can’t do that anymore,” he said. “This will provide another opportunity to get rid of medicines.”

Palmer said there will also be a document shredding service offered for people who want to get rid of papers with sensitive information.

The event is free to any resident of Lawrence and Scioto counties. Those dropping off are asked to bring proof of residency, such as a driver’s license or utility bill.

Palmer asked that materials be dropped off in a sturdy box, which will not be returned, and that chemicals be in secure containers.

He said that Veolia, an organization approved by the Environmental Protection Agency, will collect the chemicals and take them to a recycling center in Dayton.

Tires collected will go to Dalton Tires in Ashland, while LV Salvage from Portsmouth will handle the electronic items.

This event follows the citywide clean-up for Ironton, taking place this week, through Friday, from 9 a.m.-5 p.m., on Bobby Bare Boulevard near the Farmers Market, where city residents can drop off large items for disposal. Hazardous items are not being accepted at the city event.

‘We can be heroes’