Cutting to the Chase: Hornets’ McKnight signs to play baseball at Rio Grande 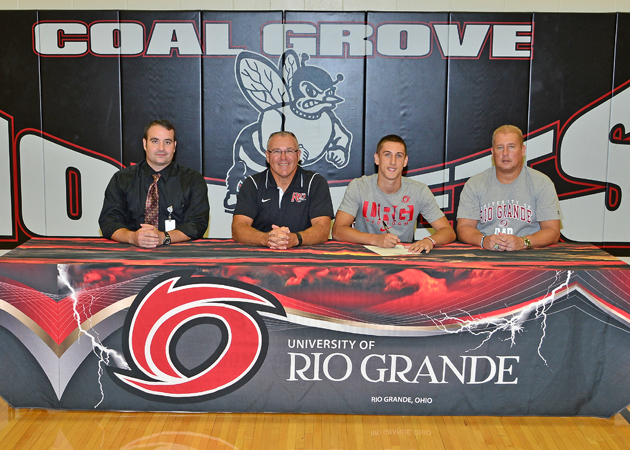 COAL GROVE — It wouldn’t be much of a surprise if Rio Grande head baseball coach Brad Warnimont stopped at a few yard sales on his visit to Coal Grove High School on Wednesday.

He seemed to be in a bargain-hunting mode.

Warnimont found the real bargain he was looking for by signing Hornets’ standout Chase McKnight.

Warnimont sees the Coal Grove senior infielder and pitcher in the same role with the RedStorm next year when he enrolls in the program.

“Right now we have Darien Lewis who was 11-2 on the mound for us and also play third base. We just have to be smart about using him. He might have to DH the day after he throws if he’s in the starting rotation. We made use him as a reliever.”

Beyond the pitching and fielder, Warnimont liked McKnight’s speed and baserunning ability, too.

“His athleticism and I love running the bases. His speed fits in well plays into what we do. He’s the first one in his class (to sign). We have some other verbals and we’re starting to lock them in which is good.”

McKnight talked with Marshall, Morehead State, Eastern Kentucky and Georgetown, Ky., among other schools but settled on Rio Grande.

“They’ve got everything in order for other years. They’ve got everything classified. They know exactly what they’re doing to win. Coach Warnimont got some younger guys from around this area, too, and they brought me in to see some of my friends. We’re going to try and build the program up.”

McKnight knows he has to adjust to the speed and every day pitching at the college level, but he is excited about the opportunity to play in the field and pitch.

“I’ll play mostly shortstop right now at (the college) level. If I need to go in there and pitch I can do it. Anything to win the game,” said McKnight.

“I think I can (play right away). Even if they have someone else, I’ll go in and try to work him out.”

Rio Grande won the KIAC tournament last season and earned a trip to the NAIA national tournament. The RedStorm finished 39-25 and earned votes in the final coaches’ poll.

The Hornets were 13-10 last season and made their first district tournament appearance since 1991. They lost 4-3 to Minford in the district finals.

McKnight pitched a couple of two-hitters last season and he had a season-high 17 strikeouts in a 4-1 win over Fairland.

“He’s a super personality. He’s very positive, a great athlete. Chase has been a big part of our program for four years. Last year in the district game he throws a perfect five innings to get us to the district finals,” said Hornets’ coach Dean Mader.

“He always has a smile on his face. He just loves the game. He always wants to throw more, hit more and work more. We’ve got a group of seniors who changed the program and put us on the map as far as baseball goes and Chase has been a huge part of that.”

McKnight wants to carry over his high school success to Rio Grande and improve his game.

Academically, McKnight plans to major in wildlife conservation in order to become a game warden.