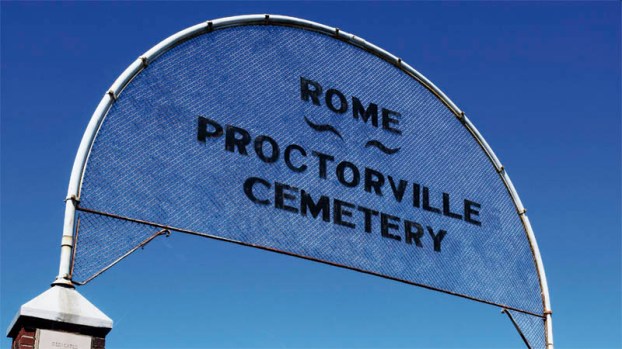 A service will be conducted Sunday to celebrate the 100 year anniversary of the Rome-Proctorville Cemetery.

ROME TOWNSHIP — A service on Sunday is planned for the public to mark 100 years since the founding of the Rome-Proctorville Cemetery.

Maxine Jenkins, who has served as secretary and treasurer for the cemetery for more than 50 years, said the event will kick off at 2 p.m. and will pay tribute to the founders of the burial park.

The event will feature music from three gospel singing groups – The Victory Trio, The Blankenships and Southern Praise, as well as two area ministers, who will speak.

The Proctorville VFW Post 6878 will present colors and close with a 21-gun salute.

“It will be mostly singing, but we have a couple ministers coming, Jenkins said. “There will be a history of the old cemetery and some on the new cemetery.”

The Rome-Proctorville Cemetery was first organized in 1916 under articles of incorporation, which were presented to Lawrence County Clerk R.W. Mountain, and then to Ohio Secretary of State Charles Hildebrandt on Sept. 25 of that year.

“That’s the day they organized,” Jenkins said of the original cemetery association.

The most prominent burial in the new cemetery, are philanthropists James and Joan C. Edwards, whose large monument stands taller than those surrounding it.

Born in London, Joan married her husband, James F. Edwards, a Huntington native and the CEO of the National Mattress Company in 1937. Noted philanthropists, the couple made more than $65 million in donations to Marshall University and the Huntington area. The school of medicine, the football stadium, the performing arts center, the cancer center and the jazz center at the university are named in Mrs. Edwards’ honor.

Jenkins and her husband came to work for the cemetery in 1960s, during a time she said the condition of the burial grounds was poor.

“The board was looking for someone to take care of it,” she said.

She helped to organize Sunday’s event, along with Carl Lee Brown and Lee Whitley, the president and vice president of the cemetery’s board.

In addition to music and speakers, Sunday’s ceremony will also offer refreshments and will feature displays on the history of the cemetery.