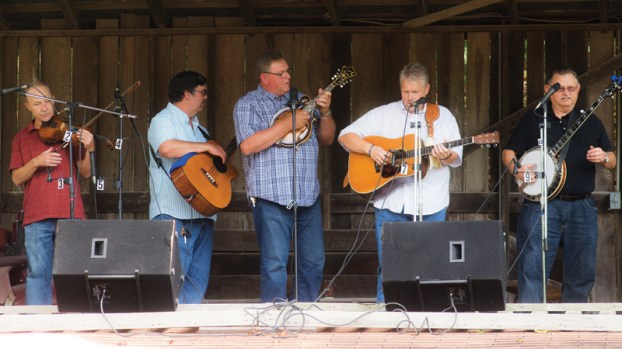 The bluegrass band Five For the Gospel performs during the festival.

The sounds of bluegrass and gospel music and the smell of cooking apple butter filled the air in South Point on Saturday.

The 18th annual Sorghum and Bluegrass Festival took place and drew a large crowd and vendors to the event, organized by Ivan Smith and Bill Enyart.

While sorghum was not made on site this year, attendees could still buy it at the festival’s booths.

However, apple butter was being prepared, courtesy of Proctorville Order of the Eastern Star and the Masonic Lodge.

Jacks Nelson, of Eastern Star, said the group had been working since 7:30 a.m.

“We’ve used 14 bushels of apples,” he said, of the mix, to which sugar and cinnamon are added.

He said the batch prepared on site would be too hot for purchase, but the group had more on sale, made Wednesday.

Nelson said they make about 3,000 quarts a year.

Sandra Dalton, of the group, said business at the booth, where attendees could also buy honey and molasses, was going well.

“We’ve done really good with the apple butter,” she said. “Of course, everyone can smell it cooking.”

She said, in addition to Saturday’s event, they also sell at Bob Evans Farm and the Milton Pumpkin Festival.

In addition to food, attendees could also purchase crafts from several vendors.

Tonya Moore and Linda Runyon, of Ironton, were set up, selling home decorations with autumn and Halloween themes.

“We do all the patterns, cut, sand and do the detailing,” Moore said.

Set up next to them was Midge Williams, of South Point, who was selling homemade wreaths in various colors.

The three of them had been vending at Sanctuary of the Ohio Valley nursing home the previous day.

“This is our third show this week,” Moore said, adding that business had been good for group.

Music for the event was provided by Five for the Gospel and other bluegrass acts, and a group of cloggers also entertained the crowd.