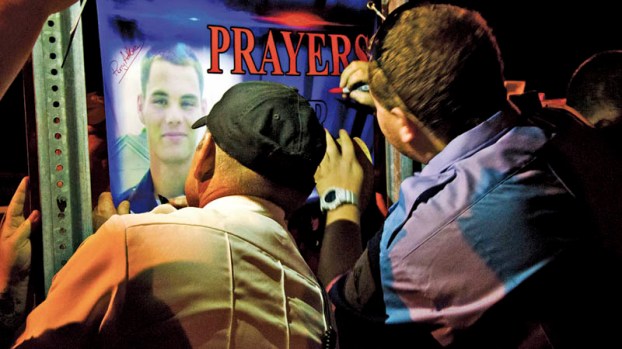 CHESAPEAKE — A community came together on Monday to pray for the recovery of a Chesapeake police officer who was injured in a car crash over the weekend.

Aaron Christian remains in intensive care at Cabell Huntington Hospital, where he is in critical condition from injuries sustained in an accident Sunday on State Route 7. A candlelight prayer vigil took place at Triangle Park in Chesapeake, where hundreds came out to support the friendly, young officer they said was dedicated to serving the village.

“We all know why we’re here,” he said. “Aaron is a great guy.He has served you guys faithfully. We need to pray for his recovery.”

The crowd drew people from across the region, with members of law enforcement and first responders heavily represented.

Randy Thompson, of Proctorville’s police department, spoke of how members of those departments had all turned out to the hospital for Christian.

Thompson told the crowd of the service that members of law enforcement provide to the community, and of the dangers involved with the job.

“Tonight, the thin blue line got a little bit thinner,” he said. “We need you to be there for us, too.”

Before the group bowed their heads in prayer, Shellie Webb, the daughter of Chesapeake Fire Chief Ed Webb and Debbie Webb sang “Thy Will,” a faith-based song by Hillary Scott.

Following the prayer, people lined up to sign a “Get well” card for Christian, with area first responders signing a second poster with well wishes.

Christian, 24, is still a relative newcomer to the village’s police force, having been sworn in by former Mayor Dick Gilpin before leaving office.

“He’s been with us about a year now,” Gilpin said.

Christian previously worked for the Coal Grove Police Department. Earlier this year, he carried out the duties of police chief in the period between the removal of Dennis Gibson and the hiring of Abrams.

When called to testify at a hearing at council this spring, Christian spoke of how much enjoyed serving the village.

“I love this community,” Christian said. “The people are easygoing.”

Following the resignation of Abrams and two other officers on Sept. 6, Christian served as the village’s lone patrolman until a new officer was hired last Monday.

Abrams said he knew Christian before coming to Chesapeake, having taken him for ridealongs in South Point when Christian was still in the academy.

“He’s a super great guy,” Abrams said. “He always does what he needs to.”

Abrams, who works full-time for South Point’s police, said the accident is still under investigation by the highway patrol, who are trying to reconstruct the crash.

He said they are studying a few possibilities as to what happened, and a final report will be made available later this week.

Christian was traveling south on Route 7 at about 2:36 a.m. Sunday, when he lost control of his vehicle, driving off the right side of the road and striking a tree, guardrail and utility pole and overturning down an embankment. First responders found him in a ditch near the vehicle, which was on fire.

Abrams, who traveled to the accident scene, said Christian has shown positive signs in the past 24 hours.

Christian’s father, Jack, spoke of the changes in his son’s condition on Monday.

“Today has been a lot better,” he said. “He’s not out of the woods yet, but he’s miles from yesterday, when we almost lost him a few times.”

He expressed his gratitude to the community for their support.

“Thanks, everyone,” he said. “I can’t believe all of this, seeing how much people care. I wish I could just hug everyone here.”

As the vigil came to an end, Debbie Webb offered a final plea for the gathering.

“As we extinguish these candles, don’t let down your prayers,” she said. “He still has a long way to go.”