Justice’s size dwarfed by her determination 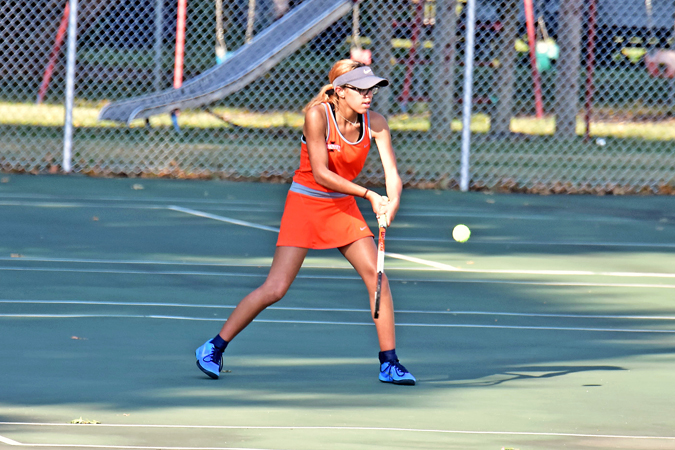 Ironton Lady Fighting Tigers’ tennis standout Aleigha Justice is small in size but large in determination as she prepares for her goal to reach the state tournament. (Kent Sanborn of Southern Ohio Sports Photos)

In this David and Goliath story, the main character plays both roles.
Ironton Lady Fighting Tigers’ senior tennis standout Aleigha Justice is the size of a David with a heart the size of Goliath.
Justice is 5-foot tall and weighs a mere 98 pounds. But her diminutive size hasn’t stopped her success.
Justice did not lose a regular singles match last year and is 10-1 this season.
Justice lost in the district finals the past two seasons and wants to take that next step to reach the state tournament and her giant-sized heart could hold the key.
“I think to go farther this year is going to be more in my head and not as much as my ability to hit because anybody can hit a tennis ball. It’s all about your heart and your determination to get there. That’s my focus for this,” said Justice.
While her weight suggests she is a 98-pound weakling, her work ethic contradicts that idea.
“Six a.m. every Saturday I’m out here running lines, lifting weights, running the track, doing miles. I do a lot of summer workouts here and there. I have to stay up with it because I’m very tiny,” said Justice.
Ironton tennis coach Ron Ross had lofty praise for Justice.
“Aleigha has been the rock of our program ever since she started as a freshman. She took a lot of lumps that first year as a freshman. Obviously she is diminutive in size, but she works as hard as she can like a Fighting Tiger should. She goes 100 percent every match and it paid off,” said Ross.
Although Justice lost in the district finals the past two years, Ross noted that those two players have graduated.
“We have high hopes for her,” said Ross.
Justice said it is difficult to accept defeat, especially her earlier loss this season that snapped her winning streak. However, she was able to avenge that loss during Ironton’s final season match at Wheelersburg.
“It was heartbreaking but it just motivated me more to try and get her the next time and get more determined. I was more determined after that,” said Justice.
Ross said Justice’s heart, determination and work ethic is contagious.
“She’s grown as a leader. That’s not natural for her. She’s really worked at being a leader. Her and Kara Spencer have just really taken over that role and with a team that has five seniors so that’s a big deal,” said Ross.
Justice began playing tennis at the age of 8 when her uncle and grandfather — Lovell Medcalf and Glenn Medcalf — got her involved in the game. Glenn is a former coach and Lovell went on to play at Morehead State.
“It’s in my family generation after generation,” said Justice. “I used to play volleyball when I was in middle school, but then I kind of just got stuck with tennis. It’s my second home. I love it.”
Although she doesn’t know what the future holds for her, Justice has set goals.
“I plan on go onto college and play tennis. I’m not sure where yet, but I also want to be a physical therapist,” said Justice.
Sectional tournament play begins Oct. 4-5 in Portsmouth. The district tournament is Oct. 12 at Ohio University with two winners advancing to the state tournament.

Familiarity with Ohio State may not help Rutgers coaches

COLUMBUS (AP) — The coaching staff at Rutgers knows the culture of the Ohio State football program as well as... read more