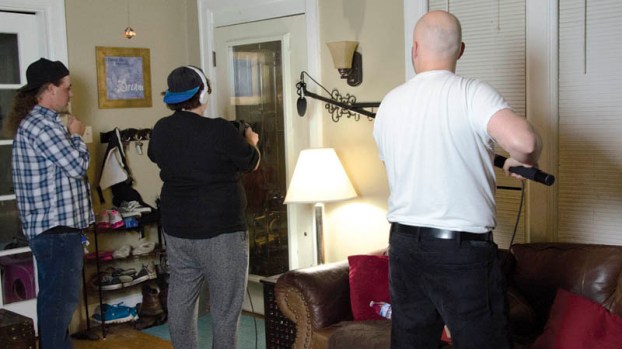 The crew of Fun Time Productions films a scene.

ASHLAND. Ky.  — A local film production company is on the road this weekend, promoting their work of the past two years.

The crew of Fun Time Productions will attend Scarefest, a horror convention in Lexington, Kentucky, where they will sell copies of their two films in the genre.

His mother, Tracey Pritt, said she and her husband, Mike Pritt, were planning to get him a gift for the occasion.

“We were going to buy him a car,” she said. But he talked to his dad and wanted the equipment to make a horror film, so that’s what we did.”

Michael, who was inspired by films by directors such as Rob Zombie, began work as a writer and director for the group, with his parents producing.

In 2015, their work paid off, with their first film “Fun Time,” premiering at the Phoenix 10 Theater in Cannonsburg.

Also working the film was Michael’s sister, Shandi Pritt, who serves as director of photography and Brian Primm, of South Point, who is the boom operator.

“Fun Time” was followed up by a second film, “Miles Before Sleep,” which, in a role reversal, took the “bad guys” of the first film and had them portray the victims for the second outing, Tracey said.

Michael said he has been making films since high school, where he learned writing and acting.

“I would make a short little film here and there,” he said.

In addition, he has worked in theater for the Paramount Arts Center and other outlets.

He said casting the films and finding people for the roles is always the hardest part of the process.

“But it’s getting easier as we go,” he said.

He also said choosing locations for scenes can be a challenge.

Tracey pointed out that all of the newest film was shot around town in places, such as the Ashland train station, with the family’s home serving for many scenes.

“Everybody asks ‘How do you find the locations?’” she said, pointing out how versatile the home has been for the films.

Though she said sometimes the neighbors may wonder exactly what is done, describing the “blood curdling screams” coming from the productions.

“So far, no one’s called the police,” she said.

The group has assembled an ensemble of actors who have starred in both films, as well as one currently in production, “Are We the Waiting?” which includes Jeremy Wheeler, Jim Moore, John Roberts, Alyssa Cordial, Rob Pemberton, Nate Stewart, Alex castle, Airic Arthur, Amber Triplett, Bridgett Kidd, Austin Kelley, Kerri Butler, Chasity Madison, Shannon Lee and Primm, who doubles as an actor.

Also joining the cast is Jim Mackard, Michael’s drama teacher from Fairview High School in Westwood, Kentucky, who has encouraged him in his work, Tracey said.

In addition to Scarefest and promoting their work on Facebook and social media, the group has attended several horror conventions, where they have had a chance to meet stars such as Heather Langencamp form the “Nightmare on Elm Street” films.

Tracey said that getting a chance to mingle with other people making the films in the genre has given them a chance to learn.

Fun Time has also produced a short film, “Night Drive,” which was accepted this week into the Film Freeways festival in Winchester, Virginia.

Principal work on “Are We the Waiting?” was finished over the summer, and now the crew is working on shooting short, additional scenes and fixing things for continuity purposes.

Tracey said the goal was to have it competed by New Year’s.

“We were planning for January, but we might have it finished by Christmas,” she said.

Michael said he plans to work on promoting the film after that, and already has a few concepts in his head for the future, hoping to start another movie in the spring.

“I’m not sure what my next project is, but the idea is to be bigger and better and learn along the way,” he said.

Haunted Tunnel opens Saturday With the return of October this weekend, kick off the Halloween season with an annual Lawrence... read more