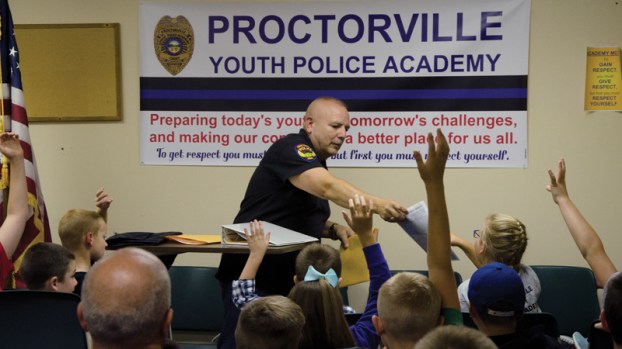 Proctorville Police Sgt. Randy Thompson hands out materials and discusses trick-or-treat safety with cadets at the first meeting of the Proctorville Youth Police Academy on Friday.

PROCTORVILLE — Turnout was heavy for the first meeting of the Proctorville Youth Police Academy at village hall on Friday.

Proctorville Police Sgt. Randy Thompson and Chief Bill Murphy registered more than 30 children and their parents, who came from throughout Lawrence County and West Virginia to sign up for the group.

“I wasn’t expecting so many kids,” Thompson said to the packed room.

He started the meeting with the Pledge of Allegiance and a prayer, then read the group’s motto, “To gain respect, you must give respect, but first you must respect yourself.”

Thompson, along with Murphy and Proctorville Mayor Rick Dunfee, have been planning the group, which aims to teach civic values to its young cadets, for some time.

Open to grades 1-12, the meeting attracted boys and girls of all ages, a few of whom were already wearing the academy’s T-shirts.
Thompson has said the group was founded in order to give children and teens an organization and cause to belong to and to inspire leadership.

“We’re a team, everywhere we are,” Thompson told the cadets. “If you see someone from here having problems in school, step in and help them out.”

Each meeting will include an educational segment, a community challenge and physical fitness training.

For the first meeting’s informational portion, Thompson went over safety tips for trick-or-treating with the cadets, telling them how to make themselves more visible when walking after dark, to keep their parents aware of their location and how to inspect their candy.

For the community challenge, they were each given a slip to fill out upon completion of the assignment to make sure their porch lights were working, to clean up sidewalks and to help an elderly neighbor.

Points are awarded for completion of the community challenge and participating in activities. As cadets acquire points, they will be awarded rank, which will allow them to participate in special reward activities and trips.

For the physical fitness training, the group started off easy, with a one-mile walk through Proctorville, led by Thompson and followed by Murphy in his cruiser. Each meeting will feature a different activity, building in intensity as the group grows.

The academy’s membership is not limited to Proctorville residents and there is no cost to join. Staff for the group is comprised of volunteers, at no cost to the village of Proctorville.

The next meeting is set for 5 p.m., Oct. 22, at a location to be determined. Organizers plan to move to a larger venue to accommodate the high turnout.

“We’re planning to do a Halloween party next time,” Murphy said.

For more information on the group, visit the Proctorville Youth Police Academy Facebook page or contact Thompson at 304-417-1962.