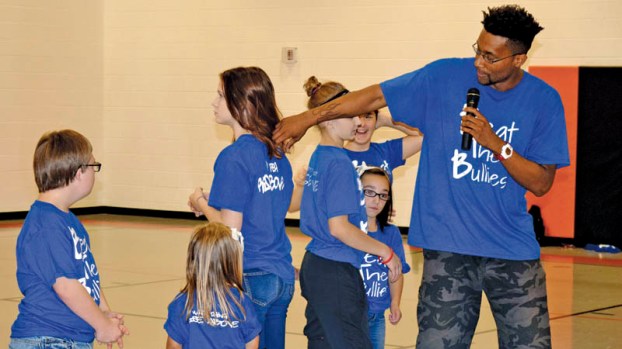 Shawn Terry, of Beat the Bullies, speaks to Ironton Elementary students at an assembly at the school on Monday.

Students at Ironton Elementary got a message in bullying prevention on Monday.

An assembly took place in the school’s gym, where the group Beat the Bullies spoke to the children.

The group, comprised of students of all ages, has visited more than 25 schools in the region, organizer Sean Terry said.

“Our motto is ‘Rise above,’” Terry, of South Point, who teaches dance classes at the Paramount Arts Center in Ashland, said. Each kid is special. The only way to stop bullying is to rise above.”

Terry said the group is open to anyone who wants to join.

“Kids sing, dance, act – and get to feel like they’re part of an organization,” he said, adding that the group helps the children to find their individual gifts. “We’ll let you shine.”

During the presentation, Terry told students not to let the words of bullies get them down.

Kaitlyn Adams, a Fairview student from Ashland, told the students that if they saw someone bullying, tell them to stop or to report them to a teacher. She also said it was important to not give the bullies power by letting their words hurt them.

“If you show them you don’t care and you stand up to them, it bothers them more than it does you,” Adams said.

Terry said it was important to report incidents of bullying.

“If you see someone getting picked on, help them out, tell them it’s going to be OK, then tell a teacher,” he said.

Afterward, students were invited to come forward and roleplay what to say when they are bullied and how to respond.

John Maynard, the school’s principal, said the assembly was part of a larger effort the school had been working on to prevent bullying.

The first Monday of October is designated as Blue Shirt Day by the organization Stomp Out Bullying and Maynard said the school had taken part in the “Blue-out.”

He said students at the school had also worked on putting together a video on the subject, “The Decision,” which can be found on the school’s Facebook page.

“We know bullying can be a part of human nature, but we want to teach students to be compassionate and understanding so they will not be bullies,” Maynard said.

Over 957K ask for absentee

COLUMBUS (AP) — The number of Ohioans who have asked for an absentee ballot ahead of the November presidential election... read more