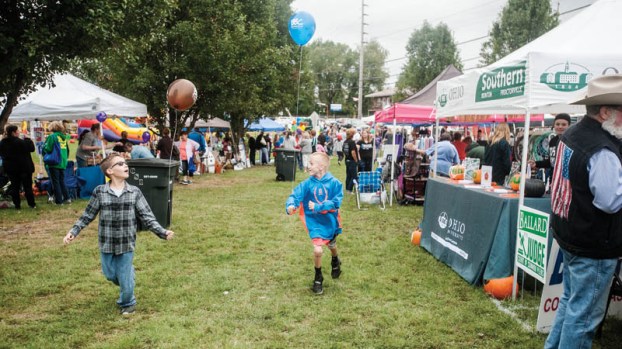 Eventgoers line the streets of downtown Chesapeake to watch the parade.

CHESAPEAKE — Octoberfest was celebrated for the 20th year in the Village of Chesapeake on Saturday.
The annual event, organized by the Chesapeake Area Citizens Coalition, drew hundreds to Triangle Park for food, vendors, a petting zoo, a car show, inflatables, live music and more.
Christa Hunt, of CACC, said the event was going “absolutely fabulous.”
“We’ve had a great turnout, despite the rain earlier,” she said.
Hunt said the CACC is a nonprofit and that money raised by the event goes back to the community.
“It goes to our fire department, our police department and to city parks,” she said.
Attendees could watch woodcarving or sample apple butter or enjoy a number of regional music acts, such as Chase Jobe and Five Dollar Red.
“The musicians are professionals and semi professionals, and are donating back to the community by playing here.”
This year’s festival had 42 vendors, who had paid to set up booths, former mayor Dick Gilpin, with the CACC, said.
The booths featured businesses like Downtown Deli, a sandwich shop located at Chesapeake Plaza, and Riverside Recovery Services, a drug and alcohol counseling program that operates a sober living home in the village. Area churches were represented, such as Chesapeake United Methodist and Big Branch Church.
“We’re just telling people the Gospel, just like Christ did, giving it away for free,” Mark Graham, of Big Branch Church, said of their booth, which featured games for children and a storyteller dressed in Biblical costumes.
“She’s doing a Bible story every hour and they’re doing crafts,” he said.
With the general election months away, both the Lawrence County Republican and Democratic parties had booths at the festival, and candidates for county office could be seen mingling in the crowd, courting voters.
Local firefighters were represented at another booth, where Chesapeake Fire Chief Ed Webb said they were promoting the fire department’s efforts to install smoke and carbon monoxide detectors in local homes, free of charge.
In addition, he said the department had recently received a donation of 480 batteries and will come to homes to change the batteries in alarms.
“It’s time to change the clocks and change the batteries,” Webb said.
Throughout the park, volunteers were collecting donations for the Aaron Christian Recovery Fund, set up to pay medical expenses for the Chesapeake officer who remains hospitalized after a car crash on Ohio Route 7 last month.
Volunteer Lisa Blake said the effort was being coordinated by former police chief Lenny Abrams, and that anyone interested in making a donation could visit a U.S. Bank branch where an account has been opened in Christian’s name.
Blake, who has visited Christian in the hospital, said there has been much improvement in his condition since the accident.
“He’s definitely moving in the right direction,” she said.
The CACC’s next event will be the annual Christmas tree lighting in the park, set for early December, which kicks off the holiday season in the village.

Clinton has slight edge in Ohio