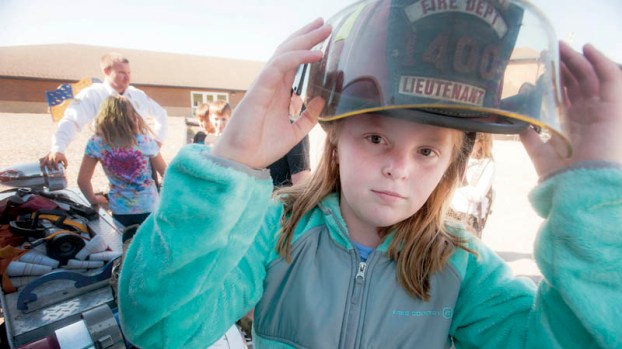 SOUTH POINT — Students in Lawrence County schools are learning about fire safety this week as part of National Fire Prevention Week, and the South Point Fire Department has been spreading the message the past three days.

Members of the fire department spoke with students at South Point Elementary from Monday through Wednesday, giving classes lessons on fire prevention and instructions on what to do in case of a fire in their homes.

The department visits the school each year, in observance of the week.

“We’re here to reiterate points we went over with you last year,” Lt. Bayli McDowell said to a group of fourth and fifth graders on Wednesday.“ “Like knowing how many ways to get out of a room and how, after you get out, to have a place for all of the family to meet.”

McDowell told the students about the value of having working smoke detectors in homes and keeping them maintained.

“If you don’t have one, tell mom and dad to call the fire department, and we’ll get them one,” she said.

She said the detectors should be tested once a month and batteries changed twice a year.

“When you change the clocks, change the batteries,” she said, adding that detectors should be changed out entirely every 10 years.

McDowell also told them to be wary of extension cords being overused in homes.

“If you have a lot of things plugged into extension cords, that’s bad,” she said. “Extension cords were not meant for long-term use.”

Following the lesson, Lt. Jacob Allen gave a demonstration of firefighting gear, donning the full set of equipment for the students.

“We have to yell a lot,” Allen said, demonstrating how the gear muffles one’s voice.

Then, the group went outside to learn about escaping a burning home.

A smoke house trailer, on loan from Perry Township’s fire department, was set up, featuring water vapor as simulated smoke that filled up its rooms.

Before students crawled through the trailer, firefighter Matthew Van Winkle told them how to check a door during a fire.

“Use the back of your hand to feel the door,” he said. “If it’s hot, there’s bad stuff on the other side and you should use a window to get out.”

Following the smoke house, the students were taken to a fire engine, which they were allowed to climb on, while others dressed up in the firefighting gear.