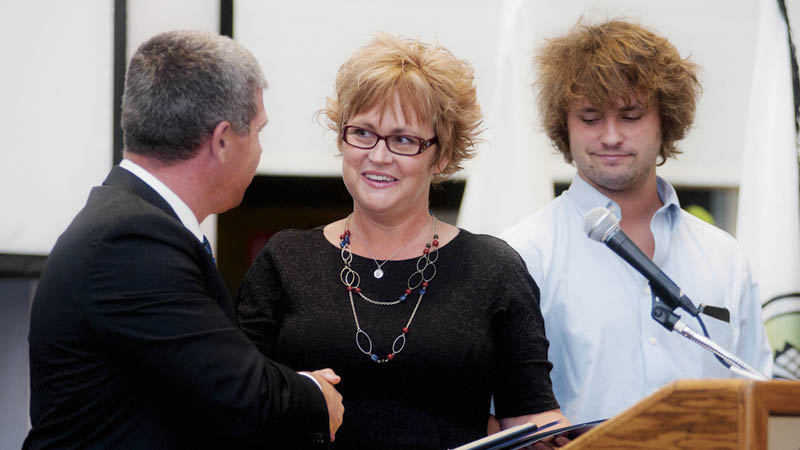 Each year, the Lawrence County Chamber of Commerce recognizes one individual who exemplifies community service.

The George Patterson Community Servant Award, named after the longtime county commissioner for his passion of being a servant for the public, was presented Thursday evening at the chamber’s annual awards banquet by his son and clerk of courts, Mike Patterson.

“When they told me who they were giving it to, it made it that much more special for me,” Patterson said of being asked to present.

This year’s award was given posthumously to D. Scott Bowling, Lawrence County Common Pleas judge who died this summer following a nearly four-year battle with ALS.

Patterson said both his father and Bowling, his close friend, cared about Lawrence County and the people in it. He said Bowling earned being called “honorable” as a judge and as a person.

“Here’s a man who is giving so much time to medical missions, to building churches, to having revivals over in different countries, who better to honor than someone like this, with an award with my dad’s name on it? Who better to honor than Scott Bowling,” Patterson said. “When he was diagnosed with ALS, I never heard the man ask, ‘why, why me?’ Because he was worried about everyone else. If we are ever going to make our county and our country great like it’s supposed to be, that’s the kind of people that we need to be. That’s the kind of people that need in office.

Accepting the award was Bowling’s wife, Donna. She said the Patterson family was special to her husband, from the encouragement George Patterson gave him and his close friendships with the man’s children.

“The Pattersons were so special to him,” she said. “He loved them so much. George was a huge cheerleader for Scott. He would get behind him and shove him and encourage him. And then Mike would come pick Scott up and take him to work and help him on with his jacket. He would pass him off to Talitha (Patterson), who would have his coffee ready every morning, his robe ready to put on him. You hear about someone being a right hand man. Talitha became Scott’s right hand, and his left and toward the end, his voice. Gene (Patterson) was also Scott’s best friend. He would always make him laugh. Even the very last day Scott was with us.”

The evening was also dedicated to several businesses, which were honored for their impact on the community.

Before awards were given out, retired Ohio University Southern and local historian Bob Leith opened the evening with a keynote speech about Lawrence County’s storied history, from its role in the Underground Railroad to its many notable residents and landmarks.

The Entrepreneur of the Year award went to WesBanco for its New Tax Credit Program, which provide special incentive loans to businesses willing to locate to the area.

Dan Mooney accepted the award, saying Wesbano has, over the past 12 years, loaned more than $60 million to around 75 businesses, which in turn, created more than 2,000 jobs in the area.

“This is WesBanco’s way to help support and build the communities in which we serve,” he said. “It truly has been a very good program and we’ve been able to help a lot of people.”

The Small Business of the Year Award was give to The Flower Shop of Chesapeake.

The business has been owned and operated by Sandra and Amy Akers since 1986.

The Business of the Year Award was give to Emerson Liebert of Ironton, which manufactures cooling systems for computer data centers.

The company employs 381 people, with 108 of those jobs being added in the past year.

Pat Burke accepted with award for the company, who praised the employees.

“Our associates are the most valuable asset we have,” he said. “They do quality work, they deliver on time. They are enthusiastic.”

Following the awards, Judge Donald Capper led the installation of the chamber’s new officers for the year. The passing of the gavel went from outgoing president, Casey Baker, to Massie Schemmel, who is the manager of City National Bank in Ironton.

Master of ceremonies for the banquet was WSAZ’s Tim Irr. Susan Taylor sang the national anthem and “America the Beautiful.”