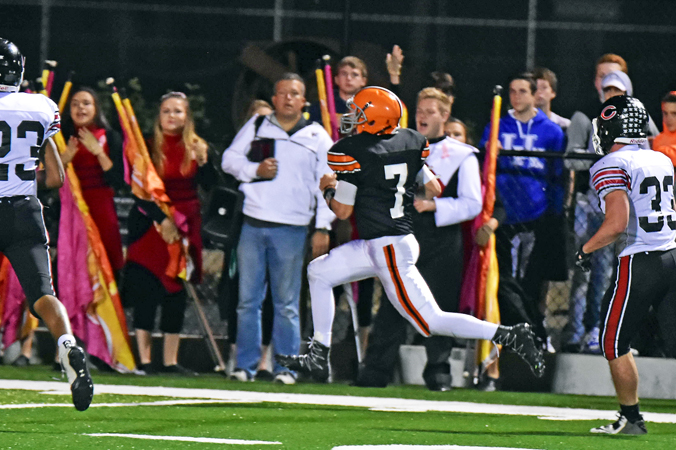 Ironton Fighting TIgers’ quarterback Jake Isaac (7) races down the sidelines and into the end zone on a 38-yard touchdown run as time expired to end the first half. The score proved to be the difference as Ironton edged the Coal Grove Hornets 14-12 on Friday in a key Ohio Valley Conference game.
(Kent Sanborn of Southern Ohio Sports Photos)

There’s a reason Jake Isaac got a 30 on his ACT.
Ironton’s senior quarterback and defensive back made two of the biggest and smartest plays of the game as the Fighting Tigers edged the Coal Grove Hornets 14-12 on Friday in a key Ohio Valley Conference game.
With the ball at the Hornets’ 38 on the final play of the first half and Ironton trailing 12-7, Isaac got a bad snap out of the spread formation. He scrambled to grab the ball and then looked to see what was in front of him.
But instead of falling on the ball or panicking, Isaac took off and used a nice block by Eli Willis to race down the sidelines and outrun the defense for a 38-yard touchdown run with no time on the clock.
Tre Neal’s conversion kick put the score at 14-12.
“He snaps it and it goes behind me and I’m thinking I’m going to fall on it. I turned my head and the green grass was everywhere,” said Isaac.
“So I’m running and Eli (Willis) is out in front of me and he made a key block and I just cut off of him and just made a play out of nothing really,” said Isaac.
Ironton made the score stand up for the win and improved to 5-3 overall and remained alone in first place in the OVC at 5-0. The win also kept Ironton’s playoff hopes alive.
“The kids knew everything was on the line with the playoff picture and league title. I’m proud of that because this team is still pretty young,” said Ironton coach Mark Vass.
“The young guys in this playoff-type atmosphere got the job done and didn’t make too many mistakes and buckled down when they had to. It was definitely a big win for us and now we have to keep it going.”
Coal Grove (5-2, 3-2) was threatening to regain the lead early in the fourth quarter. The Hornets have driven 62 yards in 12 plays and had a first down at the Ironton 22.
Kimo Baldwin got the call and powered his way to the 7-yard line. But while battling three Ironton defenders for extra yards, Isaac stripped the ball from the side and took off running.
Will said the play just an example of the play of the Ironton defense for the entire game.

“Our defense is really good. Everyone stood up and whenever it came time to play we played and stepped up and that’s all I really wanted from my team. I couldn’t ask anymore from my defense,” said Willis.
Vass said Coal Grove was a tough challenge and he was proud his team’s effort.
“Across the board, the linemen were physical, the defense was physical. It was just old-fashioned smashmouth game,” said Vass.
“You’ve got to give Coal Grove credit. They’re big and physical just like us. It was kind of fun to watch. Two old school, T-formation teams going at it. Both sides played tough. We just hung in there and got the job done.”
Coal Grove took the opening kickoff and drove 65 yards in nine plays highlighted by a 38-yard pass from Matt Cordle to Jeb Jones that got the ball to the Ironton 7-yad line.
Baldwin score from 3 yards out three plays later and it was 6-0 with 8:00 on the clock.
Ironton drove to the Hornets’ 40 before the drive stalled early in the second quarter, but after a punt the Fighting Tigers began a 68-yard march that used nine plays including a 32-yard pass from Isaac to Jourdyn Barrow.
“I’ve got to give it up to my line. They blocked hard. Those were big plays that we needed and a shout out to Jourdyn for making that great catch,” said Isaac.
Seth Fosson ran the final 3 yards for the touchdown and Neal’s kick put Ironton up 7-6 with 4:07 left in the half.
But that was plenty of time for both teams.
Coal Grove moved from its own 32 to the Ironton 13 in eight plays. Cordle had a big play as he scrambled on a fourth down play when appeared to be sacked and ran 19 yards to the 13.
Baldwin then made his own big play when it appeared he was stopped for no gain at the line of scrimmage, spun to his right and went into the end zone for a 12-7 lead and just 30 seconds on the clock.
The conversion pass was deflected.
A 14-yard kickoff return by Cameron Barker gave Ironton the ball at the 45.
Garrett Carrico went 17 yards to the 38 but the next three plays were incomplete passes. Then on fourth down Isaac made his first big play.
Vass was especially happy with the win since his team was missing several starters due to injuries.
“Resilient is the word. The team was resilient. We went in pretty short-handed and things are getting pretty thin around here, but I thought they hung in there. It was a total team effort,” said Vass.
“I know there were some big plays. Jake Isaac had those two big plays with the scramble and stripping the ball late when they were going in, and riding Garrett (Carrico) at the end. He was running hard and taking care of the ball.”
Coal Grove was also hit by injuries during the game. Defensive lineman Josh Waulk dislocated his ankle on the Hornets’ first defensive play and Daniel Rutherford was left the game temporarily with a hamstring injury.
Ironton also had a scoring threat in the second half mainly behind the running of Fosson.
He ran through a couple of tacklers for 28 yards and appeared to be heading into the end zone when he lost the ball out of bounds.
The drive stalled at the 15.
Ironton’s defense held the Hornets on a fourth-and-2 at their own 45 with 4:35 to play. The Fighting Tigers’ offense then ran off nine plays to the 10-yard line before letting the clock expire.
Ironton had 284 total yards with 243 on the ground. Carrico had 101 yards on 19 carries and Fosson 49 on nine attempts. Isaac was 3-of-7 passing for 41 yards.
Coal Grove finished with 293 yards and 255 on the ground. Jacob Clark ran 19 times for 99 yards with Baldwin getting 72 yards on 12 tries.

Panthers get job done against SP