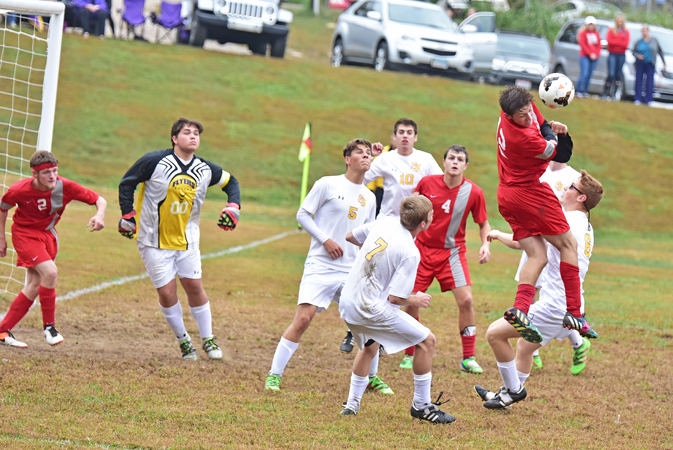 What a difference a halftime can make.
After being held scoreless in the first half, the St. Joseph Flyers exploded in the second half and beat the New Boston Tigers 6-1 on Saturday in the Division III sectional tournament.
“We started slow in the first half and couldn’t find the net even though we had numerous shots. New Boston packed the box on us and it worked for them the first half and they held us scoreless. Their coaches had a good plan and executed it well the first half,” said Flyers’ coach Mike Balestra.
But then came the second half and Balestra and the Flyers made the necessary adjustments.
“The second half was a different story. Our team found the net. We opened up space by spreading the field, going wide and taking shots outside the box,” said Balestra.
“This kept them from packing the box in the second half. This was a good team effort. We possessed the ball the majority of the game and played well as a team from back to front.”
Isaac Whaley led the second half scoring outburst as he registered his first hat trick with three goals. Peyton Adkins scored two goals and Blake Balestra added a goal.
Tre Neal had two assists with Ethan Sheridan and Balestra each getting an assist.
Kyle McQuithy had New Boston’s goal.
St. Joseph goalkeeper Bradley Rist had five saves while the Tigers’ goalie Brandon Ruggles had nine saves.
The Flyers (13-3-1) had 42 shots on goal with five corner kicks and six fouls. New Boston had just eight shots, three corner kicks and 13 fouls.
The Flyers play their next tournament game at 5 p.m. Wednesday at McDermott Northwest.