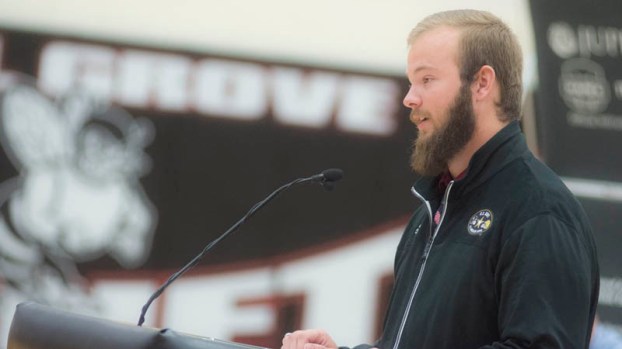 Dawson-Bryant High School student Robert Reed addresses fellow students after being officially inducted in the 2017 U.S. Army All American Marching Band at an assembly at the school on Thursday.

The best and the brightest

COAL GROVE — A Dawson-Bryant High School student received a prestigious honor on Thursday as he was inducted into an elite group.

Brandon Neff, 17, a senior at the school has been selected for the 2017 U.S. Army All-American Marching Band.

Neff, who plays the trumpet, and a Sousaphone when marching, will join the group, comprised of only 125 high school members from the millions of band students in the nation’s schools.

Representatives of the group were on hand at the school to honor Neff at a school assembly, while his family and classmates watched.

“This is one of the biggest honors in the history of Dawson-Bryant High School,” principal Dean Mader said before introducing the guests.

Staff Sgt. Christopher Geber spoke of the nature of the honor for Neff.

“He will represent our school at the national level,” Zerkel said. “It is the experience of a lifetime to accomplish this.”

Upon accepting his honor and his spot in the band, Neff was presented with a jacket.

Neff praised Zerkel for his encouragement.

“He’s been like another father to me,” he said. “He’s always looked out for me.”

Neff, the son of Robert and Karen Reed, of Coal Grove, said he has been playing the tube for about six years.

Before the assembly wrapped up, Neff played a short piece on the tuba, as he was filmed by TV cameras.

Asked about the honor, he said he was “more excited than anything.”

He said, whether he continues at a professional level or not, he will keep playing.