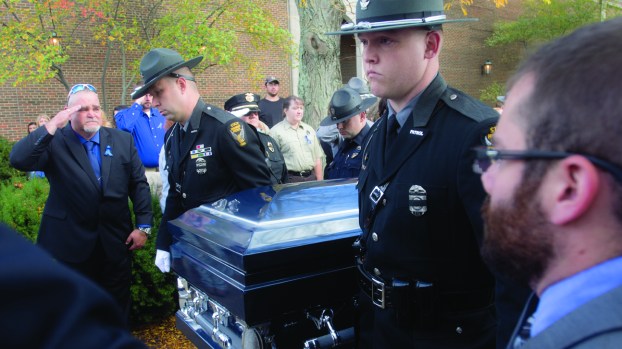 Jessica St. James/The Tribune The casket of Officer Aaron Christian is brought out of the Conley Center at Ironton High School following his funeral Saturday afternoon.

‘You are at ease’

Hundreds of mourners arrived at Ironton High School on Saturday to pay their respects to Chesapeake Officer Aaron Christian.
Christian, 24, of Ironton, who died Tuesday from injuries received in a Sept. 18 crash in his cruiser, was a 2010 graduate of the school, where his funeral services took place in the gymnasium.

Members of law enforcement, fire departments and EMS personnel from across the county and region, dressed in formal uniforms, filled the bleachers on one side of the room, as friends and family filled the floor and the rest of the seating.

The Rev. Steve Harvey, of Sharon Baptist Church in Ironton, was the first to share his memories of Christian.

“He lived a life that was special,” he said. “We’re here to celebrate that today in his going home service.”

Harvey thanked all of the first responders who turned out to honor Christian and asked them to stand.

“Your presence says a lot to all of us in this community,” he said. “We appreciate all you do to make us safe.”

Addressing Christian’s death at such a young age, Harvey, who served as the officer’s pastor and baptized him in 1999, quoted the book of Ecclesiastes, in which he said God tells us to “enjoy our portion” of life.

“Aaron had a passion for life and a passion to live,” he said. “He packed a lot into 24 years. It’s not the longevity of your days that matter, but what you pack into your days.”

Like many present, Harvey remembered Christian for his sense of humor, pleasant nature and his desire to help others.

“He was good to everybody,” Harvey said. “You families need to know that and celebrate that today. Aaron Christian will always bring a smile to your hearts. Always.”

Harvey thanked God that he was blessed to know Christian.

“He changed my life and he changed a lot of lives,” he said. “Well, done, Aaron. Enter into your joy of the Lord.”

“About 13 or 14 years ago, I visited the Christian family, where I met a boy named Aaron,” he said, recalling how the child was fascinated to learn he was a police officer, peppering him with questions about his job.

“He wanted to know more,” Thompson said. “He wanted so badly for me to handcuff him.”

Thompson said that, years later, he encountered a grown Christian, now a Chesapeake officer, and said he did not recognize him at first, until Christian refreshed him and reminded him of how he had shown him a demonstration on pressure points during the childhood visit.

Thompson said he got to know Christian well as an adult, with the two working together at the Lawrence County Fair this past summer, where he was impressed with his commitment to the job.

“He came early, stayed late and he did what he was told,” Thompson said. “He spoke to anybody and everybody as if they were the most important person to walk through those gates.”

He said the focus of Christian’s life was his two-year-old daughter, Alaina Brooke Christian, who could be seen on the floor by her family, playing with a plush frog.

Thompson said Christian had picked up the frog for her at the fair, but accidentally had left it behind with him.

“He always said, ‘I need to get that frog from you,’” Thompson said, noting that he was able to deliver it to her before the service.

He asked those present to watch over Alaina as she grew up.

“She was the love of his life,” he said. “If you love Aaron as you say you do, then let him live through you.”

Thompson concluded by thanking Christian for his service and friendship.

“You taught us to love and be kind,” he said, before giving him a salute. “You are at ease. We’ll take watch from here.”

Concluding the speakers was J.D. Crockrel, of Christ Temple Church, who attended Ironton High with Christian.

“To know Aaron was to love him,” he said. “He didn’t just want to be your friend. He wanted you to think of him as family.”

Crockrel said Christian was a close friend and that he would greatly miss him.

“You can take your rest now,” he said. “You fought long and hard. Everything’s going to be OK.”

As the services concluded, a procession began, led by Lawrence County Sheriff Jeff Lawless, of members of law enforcement and first responders, who filed one by one past Christian’s casket, each giving him a final salute.

After the service, a procession, led by emergency vehicles, took Christian back to Chesapeake for one final drive through the village he patrolled. Crowds lined the street to pay their respects, before returning to Ironton for his burial at Woodland Cemetery.

Ohio Gov. John Kasich ordered flags at public buildings in Lawrence County to half staff on Saturday for Christian’s funeral.

Christian was a graduate of the Collins Career Center Police Academy. Before working in Chesapeake, he was member of the Coal Grove Police Department.