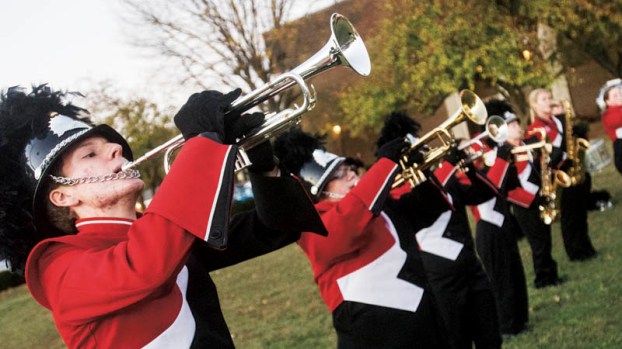 Minford Marching Band practices on the fields at Ironton High School before competing in the Buckeye Classic.

Jeff Sanders, the band director for the school, said the event is open to any high school and that invitations went out to schools in southern Ohio, northern Kentucky and West Virginia.

He said the school organizes the event, in conjunction with the band boosters, and that trophies are awarded to winners of four classes, based on school size.

Between Ironton High and the 13 guest schools, more than 800 musicians took part in the event, Sanders said.

A constant stream of musicians could be seen throughout the night, crossing the street from the bus area with instruments and props in preparation to take the filed.

Awards are given to each class for percussion, color guard, marching, music percussion and overall performance, Sanders said.

“We’ve had a wide range of bands and performances, he said, noting the mix of songs chosen. “We’ve had Beatles music, classical music by Brahms and original music composed directly for the bands.”

The event, which drew a packed audience, is quite an undertaking for the volunteers.

‘You are at ease’