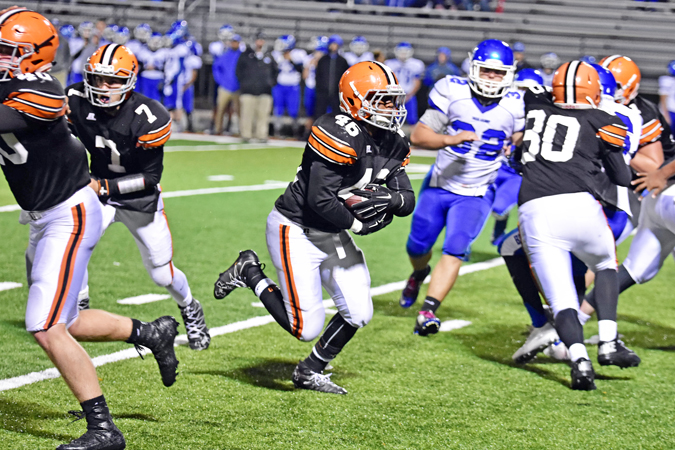 Ironton Fighting Tigers’ running back Jaxson Pleasant runs through a big hole in the Gallaipolis defense for a 15-yard gain during last week’s game. Ironton visits Portsmouth in the regular season finale and needs a win to secure a playoff berth and the OVC outright title. (Kent Sanborn of Southern Ohio Sports Photos)

The Ironton Fighting Tigers are staring at an outright Ohio Valley Conference championship and a postseason playoff berth.
Unfortunately, staring right back at them are the Portsmouth Trojans.
The rival Trojans are the last stumbling block in Ironton’s path and they are a formidable challenge.
Ironton (6-3, 6-0) has clinched at least a tie for its second straight OVC title. While the Fighting Tigers want the title alone as well as a playoff berth, coach Mark Vass said the only real concern is Portsmouth.
“We have to beat Portsmouth and then let everything else take care of itself,” said Vass. “We know them well and they know us. It’s a big rivalry game and we know we’ll get their best shot. This is going to be a really tough game.”
After going 3-7 last year, the Trojans have been a surprise this season with a 6-3 record overall and 4-2 in the OVC.
Part of the main reason for the resurgence is freshman running back Talyn Parker (5-9, 170) who is just shy of 1,200 rushing yards this season after getting 323 yards and five touchdowns last week in a 40-20 win over South Point.
“Parker is a good back. He has good speed but he is very shifty, too,” said Vass. “He’s done a heck of a job for just a freshman.”
Running the offense is senior quarterback Luke Purdy (5-11, 175) who shifted from wide receiver this year. Despite his lack of experience at the position, Vass said Purdy has been impressive.
“He may be their best player overall. He’s a good athlete but he’s also very smart. He doesn’t make bad decisions and that’s what you look from out of your quarterback. He can throw the ball but he’s dangerous when he runs and he has pretty good speed,” said Vass.
The fullback is junior D.J. Pearsall (6-0, 210) and senior Austin Lansing (5-9, 175) will also get some playing time.
The top receiver is senior Ryan Williams (6-1, 190) and he is flanked by either senior Blake Wedebrook (5-9, 160) and junior Logan Carter (6-2, 160). The tight end is sophomore Parker Johnson (6-2, 240).
Junior guard Jadan Josey (6-0, 235) and sophomore tackle Colin Boehm (6-4, 275) anchor the offensive line. Junior Anthony Ferrara (6-2, 255) is the center, junior Cody Spencer (6-0, 25) the left tackle and senior Levi Monraga (6-2, 225) the right guard.
“Their offensive line is young but they all played last year, so they have a lot of experience,” said Vass.
While the offense is young, the defense is loaded with eight seniors.
Josey as inside linebacker is the main force and he is joined inside by senior Timmy Hacker (5-7, 195). The outside linebackers are seniors Ty Oliver (5-9, 215) and Brady Butler (6-0, 205).
“Their linebackers have size and strength. It’s a good group. And hteir defensive line has good size, too,” said Vass.
The tackles are seniors Andrew Maxie (6-2, 285) and Harrison Bianco (6-2, 290) while the ends are Ferrara and Johnson.
Purdy and Williams are the corners with Wedebrook the safety in the 4-4 alignment.
“They may have the best secondary we’ve seen all year,” said Vass.
Senior Jaleel Ellis (5-10,1 95) is the punter and sophomore Narion Willis (5-7, 140) the placekicker.
Kickoff is 7 p.m.

Jim Walker jim.walker@irontontribune.com It’s rivalry week in the Ohio Valley Conference. With eight teams this year in the league, the... read more