Redmen ready for next step 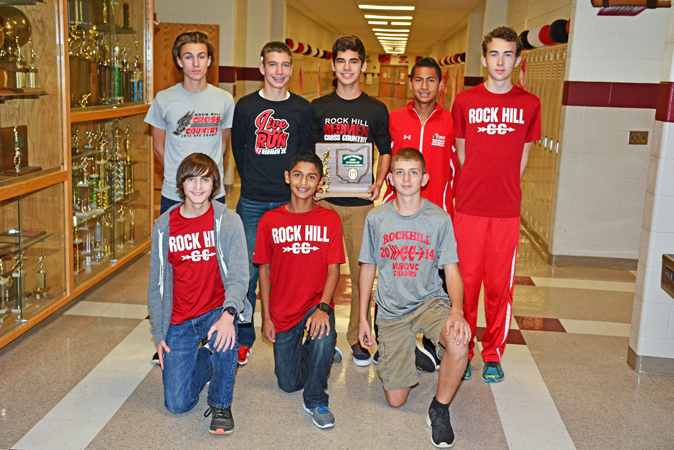 PEDRO — So far the Rock Hill Redmen are 3-for-3 on reaching their team goals.
After winning the Ohio Valley Conference cross country meet for the second straight year, the Redmen added a Division III district runner-up trophy and a trip to the regional meet to their list of accomplishments this season.
“We wanted back-to-back conference titles. We knew coming in we wanted that.
“The goal with these young kids was to get out of the district again and make it to the regional,” said Rock Hill coach Mark McFann.
“We knew it was a good group and once we got into the season and saw the way they were running we knew they had a shot of getting to the regionals again and then see where we go from there.”
The Rock Hill “Select Seven” of Brendon McCormick, Ethan Miller, Eli Baker, Logan Boggs, Brady Floyd and brothers Victor and Jasson Aguilera will run in the Division III regional cross country meet on Saturday at Pickerington North High School.
This marks the third straight regional trip for the Redmen and fourth in five years.
McCormick was second overall at the Division III district meet as he ran a 16:40 and was edged by Evan Leist of Beaver Eastern who ran a 16:38.93 time.
McCormick is a senior while the other runners are all underclassmen. Boggs, Miller and Victor Aguilera are sophomores and Floyd, Baker and Jasson Aguilera are freshmen.
McFann said the team’s success is no secret.
“They worked hard this year through the summer. The freshmen really stepped up. We have a good group of freshmen. Really, it’s just a good group of kids and they come out and do anything I ask them to do.”
The regional meet is Saturday at Pickerington North High School. The boys Div. II is 11 a.m., the boys; Div. II is 11:45 a.m., the boys Div I is 12:30 p.m., the girls Div. II at 1:30, the girls Div. 11 is 2:15 and the girls Div. I is at 3 p.m.