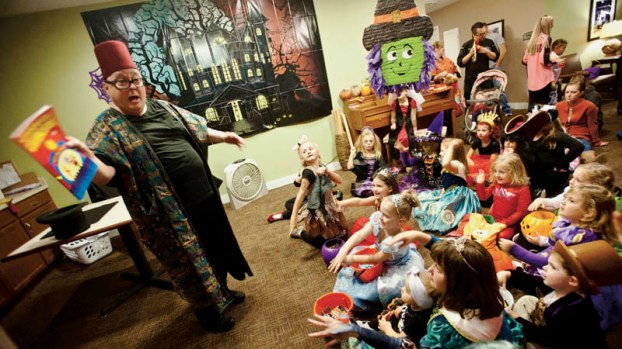 Mike Fesenmeier puts on a magic show for visiting children during a special Halloween party Thursday evening at Wyngate at RiversEdge.

Children of all ages flooded into the Wyngate at RiversEdge on Thursday for a safe trick or treat night.

It was one of the largest crowds the senior living center has had for their community events.

In addition to the trick-or-treating, in which several of the community’s residents could be found in costume along with staff, the children were entertained by Dr. Mirage, a Huntington-based magician, who put on a show that kept many of them spellbound as he performed tricks, such as taking a coloring book, asking the children to “throw colors” at it and then opened it to reveal the book colored.

The attendance was so heavy, that the audience flowed out into the hall.

“Mirage,” aka Mike Fesenmeier, who said he lived in New York City for 30 years, is a regular performer at schools and birthday parties in the region.

Following the magic show, children took turns hitting a large piñata. The winning strike came from Avery Arbaugh, who shattered it, leading to a stamped of trick-or-treaters scooping up the candy as it fell to the floor.

Awards were given out for costumes, with Emily Combs, 8, of Chesapeake, winning for the scariest for her zombie costume.  Gracie Christian, 5, was named most original as the cowgirl from Toy Story and Ava White, 3, won funniest  for her Dory costume.

Those who wish to have a booth at the event can contact activities director Julie Poff at 740-867-2500. A free lunch is included for vendors.

Will be sentenced on Nov. 2 A Chesapeake man accused of raping a child pleaded guilty to an amended indictment... read more