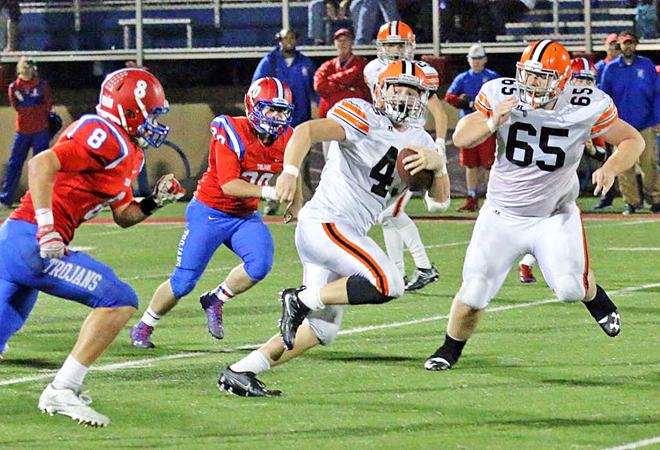 PORTSMOUTH — After just 90 yards rushing and three points in the first half, the Ironton offense appeared to be in neutral.
That changed in the second half as the Fighting Tigers shifted into high gear and ran for 389 yards and went on to beat the Portsmouth Trojans 43-28 in an Ohio Valley Conference game on Friday.
The 479 rushing yards and 521 total yards enabled Ironton to finish the regular season 7-3 overall and 7-0 in the OVC, their second straight outright league title.
“I thought the second half we came out and dominated the line of scrimmage and wore them out. It was a tough, hard-hitting game which we expected. They came to play and so did we. It’s a rivalry,” said Ironton coach Mark Vass.
“I’m proud of them. The way we started and to hang in there. Just like the first half wasn’t going good, but you could see a difference in their enthusiasm and playing a little harder when they needed to.”
Garrett Carrico had a career-high 213 yards rushing on 25 carries and scored four touchdowns to lead the ground game. Seth Fosson wasn’t far behind with 184 yards on 13 carries with a score and Ethan Duncan added 78 yards on 14 tries and a touchdown.
“Those guys run hard. It’s just team unity. The line did a good job and the backs are blocking for each other. It’s just like they’ve been doing all year,” said Vass.
Portsmouth finished with 238 total yards including 182 on the ground. Talyn Parker ran 18 times for 122 yards and a score but 111 of those yards came in the first half.
The Trojans ran just 10 plays in the second half as Ironton dominated the time of possession.
“At halftime our coaches did a good job of making adjustments and getting our line right,” said Carrico. “They came out and were opening up holes and firing off the ball good. The holes were there so the credit goes to them. All the backs are running hard and blocking for each other.”
Portsmouth (6-4, 4-3) fumbled away the opening kickoff but Ironton failed to capitalize and turned the ball over on downs at the 40-yard line.
The Trojans proceeded to drive 60 yards in nine plays capped by Talyn Parkers’s 5-yard run with 6:06 on the clock. Narion Willis kicked the conversion for a 7-0 lead.
Ironton couldn’t get its offense going and punted on its next two possessions. But the Fighting Tigers got the ball back at their own 14 with 1:55 and went on a scoring drive.
A 25-yard run by Fosson and a clutch 33-yard pass by scrambling quarterback Jake Isaac to Jourdyn Barrow got the ball to the Trojans’ 12-yard line with 1.3 seconds on the clock.
Tre Neal booted a 29-yard field goal as time expired and it was 7-3 at the break.
“They were crowding the line of scrimmage and just outnumbering us. We did a better job getting a hat on a hat in the second half. The way the backs run hard they broke some of them,” said Vass.
Ironton took the second half kickoff and went 62 yards in 11 plays capped by Fosson’s 7-yard scoring run and it was 9-7 at the 6:08 mark.
But Luke Purdy returned the ensuing kickoff untouched 83 yards for a touchdown and Portsmouth had its last lead at 13-9 with 5:57 on the clock.
It didn’t take Ironton long to answer as Carrico raced 69 yards on the first play for a touchdown and Neal’s kick made it 16-13 at the 5:36 mark.
Portsmouth managed just five yards and a punt to give the ball back to Ironton at the 30.
A 43-yard run by Fosson keyed the 70-yard, six-play drive with Carrico going 3 yards for the touchdown and a 23-13 lead.
“I just ran hard and kept on going,” said Fosson who runs with a combination of power and speed. “I like to do both.”
Parker then return the kickoff 64 yards for a touchdown and Portsmouth trailed 23-20 with 39 seconds left in the quarter.
Fosson ran for 40 yards on the final play of the quarter and Carrico’s 1-yard run with 10:21 to play put Ironton up 29-20.
Portsmouth fumbled the Ironton kickoff and Alex Cox recovered for the Fighting Tigers at the 44-yard line.
Eight plays later Duncan went 3 yards for the touchdown and it was 36-20 with 5:19 to play.
A fumble on second down was recovered by Fosson at the 48 and three plays later Carrico bolted 37 yards for the touchdown with 3:42 to go and it was 43-20.
Portsmouth tacked on a 36-yard scoring pass from Purdy to Ryan Williams with 2:10 to play. Blake Wedebrook caught the conversion pass to set the final score.
Ironton will now play in the Division V Region 19 playoffs on Saturday. The final ratings and pairings will be announced on Sunday.

Panthers roll past Dragons to go 9-1