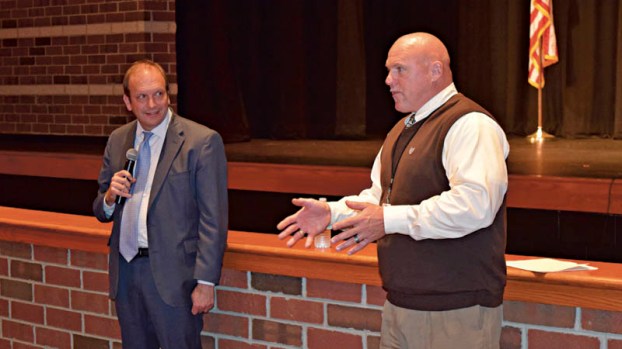 Students at Ironton High School got a rare chance to have a question and answer session with an Ohio Court of Appeals judge on Monday.

Patrick DeWine, who serves on the First District Court of Appeals, based in Cincinnati, and is running for one of two Ohio Supreme Court seats on the ballot this fall, spoke to juniors and seniors in the high school’s government classes.

DeWine told the students that he hears a mix of cases, from criminal to civil.

“One of the things I love about my job is every day is different,” he said, noting that he’s ruled on everything from adult to juvenile cases and from murder cases to small claims suits. “We hear it all.”

After explaining the appeals process to the students, he took questions.

One student wanted to know if protesters or public opinion had any impact on his rulings.

“We try not to,” DeWine said. “We try not to let public opinion affect how we decide. Judges are supposed to follow the law.”

He said this means, at times, that he may rule according to laws he disagrees with.

Another student wanted to know if he had ever changed his mind on a ruling after a case was over.

“I don’t think there’s ever been a case of where I thought, ‘Boy, I was wrong. I wish I hadn’t done that,’” he said. “But you do have second thoughts.”

DeWine said he doesn’t dwell on past rulings and tries to move on.

He said the hardest case for him was ruling on a death penalty matter.

“There’s nothing more serious that you can ask of a judge,” he said.

DeWine, a Republican, told the students that Ohio is unusual in that court candidates run for nomination in a primary, but appear on the general election ballot with no party listed.

And, unlike other states, judges are elected, rather than appointed by a governor or legislature.

“We want judges to be impartial,” he said. “By electing them, they answer to the people, rather than to a branch of government.”

DeWine said that, while the judicial system in the United States may have flaws, he feels it works well.

At the conclusion of the event, Jake Issac, the school’s student body president, presented DeWine with an Ironton High T-shirt, and the judge, in return, donated a gavel from the court of appeals to the school.

DeWine directed Issac to try the gavel out, to adjourn the session.

“We have a huge focus on careers,” he said. “And, though we didn’t plan it, this turned partially to a career event. Several of the students are thinking about going into law.”

Nance said he hopes the more students are exposed to different path, the more alternative options they will realize are available to them.