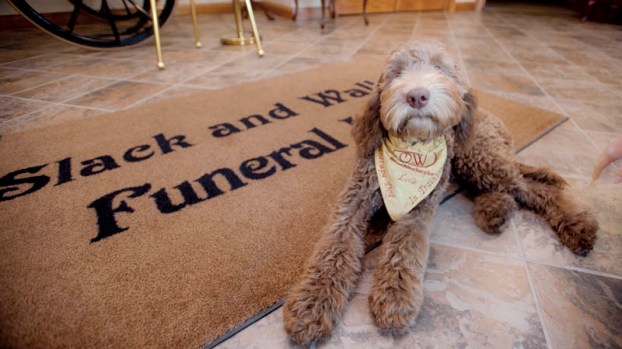 Beth Wallace with a therapy dog-in-training Lola at the Slack and Wallace Funeral Home in South Point. Lola is a 4-month-old golden doodle.

“At my house, we have two older ones who used to be therapy dogs,” she said. “They were taken to nursing homes and hospice houses.”

Recently, she decided that a dog would be a good way to help those grieving after the death of a loved one.

About a month ago, Lola, a 4-month-old golden doodle, joined the funeral home, which has been in operation since 2011 in the renovated building of the former Tri-State Worship Center on Solida Road.

“She was about three months old when we got her,” Wallace said.

Lola stays with Wallace at home and comes to work with her.

“She’s in training right now, at Pettiquette in Barboursville, with Tim Childers,” Wallace said of the program, which will begin with basic obedience training. “After a year, she can be certified for therapy.”

Wallace said Lola will be available to families on a by-request basis, and can help to cheer up those grieving, to relieve negative thoughts and stir positive feelings.

“Dogs have a way about people,” she said. “They love them. They have a calming nature.”

Wallace said they are the only funeral home in the area that she knows of to have a therapy dog.

She said Lola’s loving personality is well-suited for the job.

“Tim told me that she’s the perfect dog for therapy,” she said.

SOUTH POINT — With the upcoming holidays, local businesses and groups have teamed up with the Ohio State Highway Patrol... read more