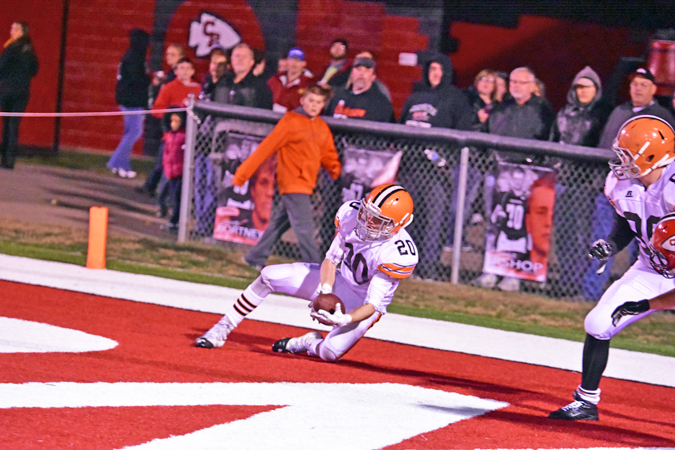 COSHOCTON — The veterans were too much for the youngsters.
With 13 seniors with two and three years of varsity, the Coshocton Redskins proved too strong for the Ironton Fighting Tigers as they posted a 34-11 win on Saturday in the Division V Region 19 quarterfinals of the postseason playoffs.
“This was a very good ball team. They were physical and they had some size. We knew ahead of time we couldn’t make mistakes. They had 10 seniors playing on both sides of the ball and you could tell,: said Ironton coach Mark Vass.
“Turnovers hurt us and we had a couple of fumbled snaps and exchanges that ended some drives. We had to make a couple of plays here and there and if we do, things a re a little different. They made the plays and that was the difference in the ball game.”
The veteran Redskins racked up 527 total yards including 331 on the ground while quarterback Andrew Mason was 11-of-17 for 196 yards and a score.
The running game was balanced as Dallas Griffiths ran 14 times for 127 yards and three touchdowns. Zach Michael had 12 carries for 105 yards and Kobie Means 99 yards on 10 tries.
Ironton (7-4) finished with 338 total yards with 192 on the ground. Jourdyn Barrow had 72 yards on six attempts and Garrett Carrico 69 yards on 20 rushes.
Quarterback Jake Isaac hit 6-of-13 passes for 146 yards. Eli Willis had two catches for 70 yards and Barrow two grabs for 41.
Coshocton (10-1) came into the game third in the region and was ranked 10th in the final Associated Press poll. Ironton was sixth in the region an unranked.
After trading punts, the Redskins put together the first scoring threat.
Means shook a tackle in the backfield and ran 56 yards to reach the Ironton 24. The Redskins got to the 8 but on a fourth-and-goal at the 4, Mason’s pass for Michael was incomplete as Isaac knocked the ball away.
Ironton then flipped the field as Isaac hit Willis on a 50-yard pass play to the Coshocton 45.
The Fighting Tigers drove from there to the 18 where the drive stalled and Tre Neal kicked a 35-yard field goal and it was 3-0 with 10:59 left in the half.
But Coshocton got the ball at the 46 on the kickoff and used the field position to answer.
A 37-yard run by Michael got the ball to the Ironton 15 and two plays later Mason hit Michael with a 14-yard touchdown pass. Jake Ramsey kicked the point after and the Redskins led 7-3 at the 9:24 mark.
Ironton went three-and-out but Ethan Duncan stripped Means of the ball and recovered it at the Coshocton 49 with 7:03 left in the quarter.
The Fighting Tigers failed to move further than the 28.
Coshocton used a 29-yard pass to Griffiths who out-jumped Isaac to reach the Ironton 27.
A 17-yard pass to Griffiths got the ball to the 6-yard line and Griffiths ran for the touchdown on the next play and it was 13-3 with 1:59 left in the half.
Ironton’s defense turned back the Redskins at the 22, but a three-and-out gave the ball back to Coshocton and it took just two plays to score.
Mason and Jordan Carkin hooked up on a 55-yard pass to the Ironton 2 and Griffiths scored on the next play for a 20-3 lead.
The Fighting Tigers answered with a drive to the Redskins’ 15 thanks to a 31-yard pass to Barrow, but pressure by the defense forced two incomplete passes to end the threat.
Coshocton extended its lead four plays later as Griffiths bolted 81 yards for a touchdown and it was 27-3 with 11:25 to go.
Ironton refused to quit with a 57-yard, nine-play drive capped by Duncan’s 1-yard run. Isaac hit passes of 20 yards to Willis, 10 to Barrow and 24 to Bryson Thomas to fuel the drive.
“Our kids fought hard every play. They never quit. I’m proud of their effort tonight and all season. They battled through injuries and adversity all year,” said Vass.
Ironton forced a punt but fumbled the ball at its own 25. Coshocton’s first unit stayed in the game to get one more score as Means went 14 yards for the touchdown and it was 34-11 with 2:28 left.
Coshocton will now play Sugarcreek Garaway next Saturday at a site to be determined.