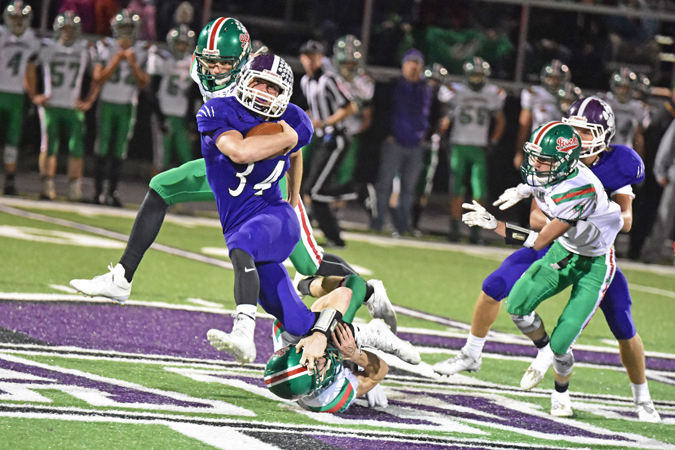 CHESAPEAKE — Playoff games are just as long as regular season games, but in playoff games you don’t have as much room for error.

The Chesapeake Panthers made more errors than Barnesville and that was enough for the Shamrocks to get a 41-22 in on Friday in the Division VI Region 23 playoff quarterfinals.

“You’ve got to execute for four quarters in a playoff game. We just didn’t do that tonight. Give them credit. They did most of the game,” said Panthers’ coach Andy Clark.

“We were in position to make plays and we didn’t make enough tonight. They made the plays when they needed to. None of the breaks went our way. We didn’t get any turnovers. We didn’t get the significant penalty that we need to help us out. Tonight they played better than we did.”

The Panthers (9-2) lost a fumble and had an interception that led to touchdowns that were crucial in the outcome.

Chesapeake had 204 total yards while Barnesville finished with 277.

Casey McComas was 5-of-8 passing for 53 yards, a touchdown and an interception. But he was sacked four times for minus 35 yards that left the Panthers’ leading rusher with minus 20 yards on 16 carries.

Barnesville tailback Caide Bunfill ran for 1,628 yards in the regular season but was held to 80 yards on 20 carries. Bunfill scored twice and threw for a score.

The Shamrocks’ Matthew Burkhart was 10-of-13 passing for 105 yards.

“I felt we did a good job containing (Bunfill). The quarterback (Burkhart) made some nice throws. We were pretty close in coverage and he hit the window he had to hit,” said Bunfill.

Barnesville (9-2) took the opening kickoff and went 57 yards in nine plays t score on a 1-yard sneak by Burkhart. Jordan Graham’s conversion kick made it 7-0 at the 7:34 mark.

Chesapeake was forced to punt and the Shamrocks went on another 57-yard scoring drive in nine plays. This time Bunfill ran 4 yards for the touchdown and it was 13-0 with 11:20 in the half.

Chesapeake drove to the Barnesville 9-yard line only to have the drive stall.

But the Shamrocks were forced to punt from their own end zone and a 16-yard return by Ty Wilcoxon had the Panthers at the Barnesville 31.

The Panthers needed just three plays to begin the second half to take their only lead of the game.

A couple of Chesapeake penalties including a 15-yard unsportsmanlike flag help get Barnesville to the Panthers’ 17. Four plays later Burkhart had his second 1-yard scoring run and it wa 19-14.

Misfortune struck two plays later as the Panthers fumbled and Butch Holskey recovered the ball at the Chesapeake 41.

On first down, Bunfill hit a wide-open Hunter Graham on a halfback pass and it was 25-14 with 5:41 left in the quarter.

Chesapeake got its lone break of the game when the Shamrocks muffed a punt and Austin Browning recovered the ball as the Barnesville’s 27.

Three plays later Scott burst through the defense for a 29-yard scoring run. Fletcher ran for the conversion and the Panthers cut the deficit to 25-22 with 1:30 on the clock.

But the Shamrocks quickly regained the momentum with a 66-yard, 11-play drive capped by Bunfill’s 16-yard run. Bunfill added the conversion run and it was 33-22 with 8:29 to go.

Chesapeake kept its hopes alive with a drive to the Barnesville 22-yard line. But on fourth down and 6, Hunter Graham intercepted a pass and returned it 64yards to the Panthers’ 24.

Clark had mixed feelings about the loss and the effect it had on the season.

“A lot of people would like to have a 9-2 season. We’re upset. We have bigger goals now. The kids weren’t happy just to be in the playoffs. They worked extremely hard this week to advance. The score doesn’t indicate it but we played extremely hard. We played pretty well at times. We moved the ball and we stopped them., we just didn’t do it consistently,” said Clark.

“For our seniors going out, 9-2 is not bad. Our young guys have seen a good example this year and last year of how you have to conduct yourself and how hard you have to work in the off-season.

COLUMBUS – Why did the Big Ten announce this week it will begin playing six football games a season on... read more