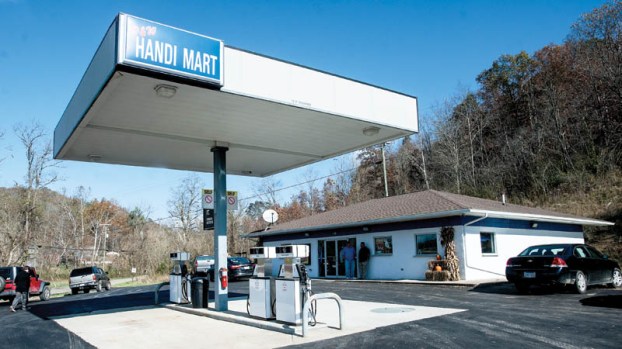 P&W Handi Mart located at 12867 State Route 243, in Chesapeake, down the road from Collins Career and Technical Center.

GETAWAY — A crowd of customers and local officials gathered and the smell of fried chicken filled the air on Saturday for the grand opening of the new P & W Handi Mart.
The convenience store, located at 12867 State Route 243, opened for business on Friday, and a ribbon cutting took place Saturday morning.
Named for its owners, William and Patricia Hicks, the business is housed in the former Ohio Valley Fuels building, which has been vacant for about seven years.
“I’ve driven by and always wished someone would open it,” William Hicks said.
He said they purchased the location in June and worked to extensively remodel what was a “shell of a building,” repainting the interior and adding new gas pumps.
He said they had to run off a groundhog, which they named Getaway Chuck, who was living in the empty building when they took it over.
“We’ve had tremendous support from the public,” he said, noting that there was not much competition in the area and the station was needed.
In addition to the gas station and convenience store, P& W also houses a Charley Biggs fried chicken franchise and seating for customers.
“Everyone else does pizza, so we decided to do chicken,” Hicks said.
Hicks said they have been approved to sell lottery tickets and to do EBT. There are more upgrades coming, such as a new sign and digital prices for gasoline, he said.
Lawrence County Chamber of Commerce director Shirley Dyer was on hand, to present a certificate welcoming the business and to provide the ribbon for the opening.
The grand opening event ran into the afternoon, and customers had a chance to win chicken dinners and gift certificates for the building.
Hicks said he had help in starting the business and wanted to thank Joe Adams of Louisa Community Bank, who helped him get a loan, Debbie Dickess, of M&M Realty and Lawrence County Commissioner Bill Pratt, who lives nearby and helped with work at the county level.
P&W employs seven workers and is open seven days a week, from 6 a.m.-8 p.m.