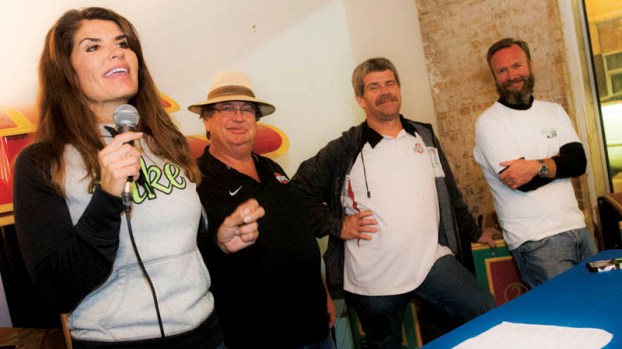 Will be comprised of two Republicans, one Democrat

The Lawrence County Commission has one new face and an incumbent re-elected, following Tuesday night’s election.

With all precincts reporting, Democrat DeAnna Holliday won the election over her opponent Christopher Collins, 56 to 39 percent, with independent Jon Ater coming in at 6 percent. Holliday, a local businesswoman and eight-year member of the Dawson-Bryant Board of Education,  said she was “elated” by the win.

“I did not expect it to be as large,” she said of the margin. “I worked hard and I’m blessed to know everyone noticed.”

She said the feeling was “too good to describe.”

“I want to do nothing but good for this county,” she said.

She said Lawrence County has several things it needs to accomplish soon, and said work on a new county jail is a top priority.

“I did not do this by myself,” she said. “Most important, is the team of people I had working with me. My heart is full of appreciation for the incredible effort of these incredible people.”

Pratt, who was running for a second term, defeated Democrat Doug Malone, 58.5 to 41.5 percent.

Pratt said he is confident the county will soon get to the 20 percent funding needed to start the process of building a new jail.

With Holliday’s election, the commission’s make-up goes from three Republicans to a 2-1 split.

Pratt said the change would not be a factor in their work.

“I don’t think there’s going to be any problem,” he said. “We’re all local, Lawrence County residents and we’ll do fine.”

“I will work with everyone,” she said, stating party lines would not be a concern. “It’s a time for healing in Lawrence County.”

Collins and Malone could not be reached for comment for this story.

On the cutting edge

Seventh graders at Rock Hill Middle School got to see and experience the latest trends in technology on Friday, when... read more