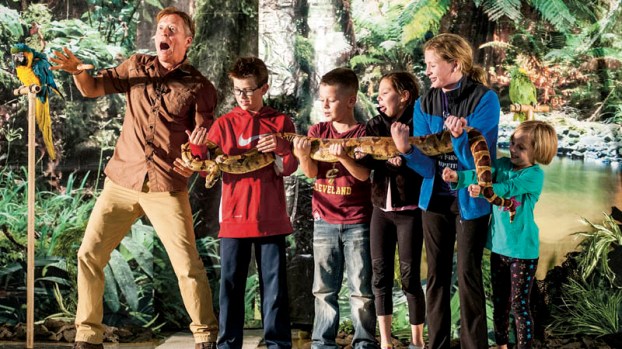 CHESAPEAKE — Students and parents got a chance to learn about endangered animals of the rainforest on Wednesday.

The nonprofit group Understanding Wildlife brought the Rainforest Live! show to Chesapeake Elementary, along with several animals native to that region.

Host Mike Kohlrieser presented parrots, macaws, cockatoos, alligators, a lemur, a boa constrictor and a capuchin monkey to the crowd.

“He shows the animals, gives the backstory on each and tells what will happen to them if we don’t save the earth,” Amy McCallister, the site coordinator for the Peake Afterschool Program, said.

Kohlrieser said action must be taken to save endangered species.

“If we’re going to help them, now is the time to get busy doing it,” he said.

The show featured tricks by the animals, such as the macaw retrieving a dollar bill from a parent in the audience, as well as a chance for students to come onstage and hold the boa constrictor.

In the show’s intermission, the children could come onstage and get a picture taken with the snake, for a donation to the group.

Will be comprised of two Republicans, one Democrat The Lawrence County Commission has one new face and an incumbent re-elected,... read more