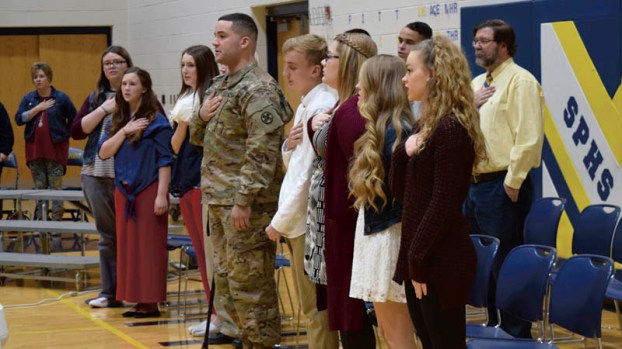 Members of Rho Cappa, a social studies and history honors society at South Point High School, stand for the Pledge of Allegiance during the Veterans Day program at the school on Friday.

SOUTH POINT — Veterans and their families were treated to a meal in their honor on Friday, an annual tradition of the school.

Members of Rho Cappa, a history and social studies honor society, served the lunch, including chicken soup, salad, biscuits and other home-cooked food, following an assembly which paid tribute to service members.

Members of the school’s choir sang and a slide show honored veterans and those killed in action from the South Point area.

Guest speakers included Nicco Palladino, a South Point graduate and veteran, who presented the school with a flag flown in Afghanistan.

He was followed by Lloyd Richmond, a veteran of World War II and former history teacher at South Point, Coal Grove and Ironton schools.

He told the assembled students about his training and being shipped out to the Pacific, where, in New Guinea, he entered a combat zone.

“The scariest thing was when the enemy planes came over and dropped bombs,” he said. “On a Tuesday, they came for us. We lost six of our boys there.”

Before he exited to a standing ovation, he thanked the students for the tribute.

“At 96, I still wonder why I’m still around,” he said. “I’m glad I’m here. I’m glad for all the people I served with and I know you appreciate them,” he said.

Madison Epperly, a senior and student body vice president, said the event is important for the school to host.

“It lets them know that they’re still honored after they serve,” she said.

Skylar Chinn, a junior, said the best part is seeing the effect it has on the veterans.

“Getting to see the smiles on their faces,” she said.

Caleb Pennington, a senior who handled the audio/visual presentation, said the veterans have sacrificed and the group was paying tribute to that.

“It’s the least we could do our show our appreciation,” he said.