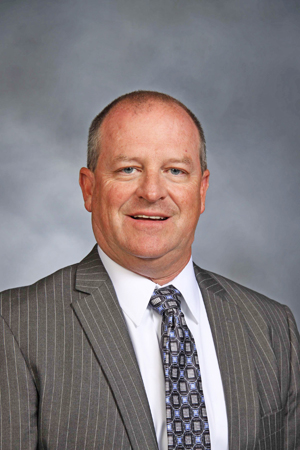 Ironton native Jay Wolfe has been elected to the Ohio High School Athletic Directors’ Hall of Fame. Wolfe is the athletic director at Olentangy High School.

COLUMBUS — Jay Wolfe has spent a great deal of his career as an athletic director.
Now he’s going to be immortalized as one.
The current athletic director as Olentangy High School will be inducted into the Ohio Interscholastic Athletic Administrators Association during its annual Hall of Fame ceremonies on Monday, Nov. 14 at the state athletic directors convention.
Wolfe is one of 11 administrators to be inducted into the Hall of Fame this year.
“It’s an honor. This is my 21st year. Not many people stay in this kind of job for a long period of time. It’s hard to believe it’s been that long. I went to the A.D. workshop and they made an announcement. I used to be the one who made the announcement,” said Wolfe.
The Ironton native an 1982 graduate of Ironton High School was an all-district guard in basketball.
Wolfe earned a bachelor’s degree in 1986 at Ohio University and earned his Masters three years later.
As an undergraduate, Wolfe worked in the Ohio athletic department and assisted with numerous OHSAA tournament events and also served as a team manager for the men’s basketball program.
Wolfe began his basketball coaching career as a graduate assistant in 1986 and worked under Danny Nee and Billy Hahn.
He was hired as an assistant coach at Capital University in 1988. He served four years as the Fall Sports Game Manager along with assistant coach. He coached at Kent State from 1992-96.
Wolfe left collegiate athletics and took the job as head basketball coach and athletic director at Watkins Memorial in 1996.
He maintained his dual role for three years where the boosters started Bingo and raised nearly $120,000 in two years under his guidance.
The surplus of funds enabled the school to build needed storage facilities and upgrade other athletic venues.
Wolfe was named the athletic director at Olentangy High School in 1999 and was at the forefront of the dramatic population explosion that saw the district grow from 5,000 students to slightly less than 20,000 in the fall of 12016.
The growth led to two more high schools being constructed: Liberty and Orange. Wolfe remained at the original high school but was instrumental in the facility development of the two new schools along with scheduling and the hiring of athletic directors for the schools.
At Olentangy, Wolfe would oversee the development of athletic improvements over the past 14 years.
In 2002, a new 5,5000 season stadium was built. Two years later the main gymnasium underwent a facelift and the school added a weight room and a wrestling room.
In 2013, Wolfe and the boosters finished a two-year project to raise funds and install artificial turf at the football stadium.
Besides football, basketball, baseball, softball, golf and track, Wolfe oversees other sports such bowling and ice hockey.
As an administrator, Wolfe has served on many Ohio Capital Conference committees. In 2003 he was recognized by the Central District as their Athletic Director of the Year.
He was elected as the Class AA representative to the Central District Athletic Board from 2006-12.
While on the CDAB, Wolfe served as president and spearheaded the basketball and volleyball tournament format where higher seeded teams play at home during the sectionals.
Wolfe also served on the OHSAA Board of Directors form 2008-09, was the president of the COIAAA from 2013-16 and was named the COIAAA Athletic Director of the Year in 2013.
Jay and his wife, Kelly, reside in Galena. He has two daughters, Madison, a graduate of Miami (OH) University and currently a teacher and swimming coach in the Atlanta area, and Carly who is a freshman at Miami University in Oxford.
Jay is the son of John and Jan Wolfe of Ironton.
John Wolfe was recently inducted into the Ironton High School Athletic Hall of Fame for 42 years of service to the school’s athletic booster organization.