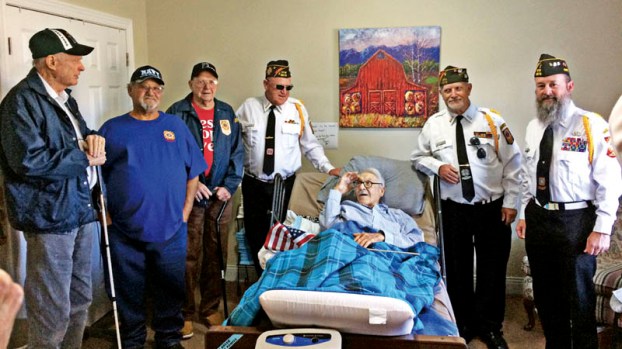 Members of Proctorville VFW Post 6878, greet Alvis Baker, a World War II veteran of Normandy and the Battle of the Bulge, following the Veterans Day ceremony at the Wyngate at RiversEdge in Proctorville on Friday. At left is Paul Johnson, a fellow World War II vet and Wyngate resident.

More than 25 percent of the residents of the Wyngate at RiversEdge are veterans and, on Friday, the senior living community hosted its annual Veterans Day ceremony in their honor.

“We celebrate them every day, but this is one day we can set aside to recognize our veterans,” Bryan Gilpin, of Hospice of Huntington, who partnered with the Wyngate for the event, said.

The ceremony began with the raising of the flag, the playing of the national anthem and a gun salute, provided by members of the Proctorville VFW Post 6878 and the Fairland High School choir sang for the veterans, their families and other residents.

“You served willingly in times of conflict and times of peace,” Kelly Levi, the facility’s resident manager, said. “What an example you are to us.”

More than a dozen veterans, from various branches of the armed forces, who served in World War II and Korea took part in the event, however, one was unable to make it outside, due to health reasons.

Alvis Baker, 91, from Barboursville, enlisted to serve in the Army during high school and is a veteran of World War II, serving at Normandy, in the Battle of the Bulge and in the Pacific Theater.

Confined to bed, he missed the outdoor ceremony, so the VFW members and some of the Wyngate’s veterans, along with staff, visited him in his room, gathering around his bed.

“I’m from here in town. Thank you for your service, Sir,” VFW member Dean Cooper, a Korean War veteran, said, introducing the group.

Baker was visibly touched by the visit, but remained humble.

“Don’t thank me,” he said, and he spoke of all the work those on the home front did while he served and the support they gave him.

Each of those assembled shook hands with him, and an essay on Veterans Day that Baker wrote for his church a few years ago was read aloud.

His family thanked the post members for taking the time to visit him, telling them they had “made his day.”

SOUTH POINT — Veterans and their families were treated to a meal in their honor on Friday, an annual tradition... read more