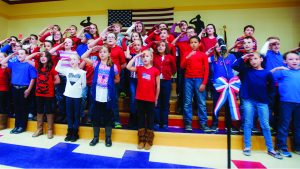 The program was directed by Bethany Himes, the school’s music teacher, principal Trisha Harris said, and included piano music from students, a slide show and singing from the fourth grade choir.

Following the choir’s performance, student Violet Gilcher played “The Star Spangled Banner” and the veterans were invited to join the students on the stage, where they received applause.
Himes said they had been rehearsing for the event since September.

“We started a little early, because they had to learn the preamble to the Constitution,” she said.

She said the group had several students who were skilled on the piano and they wanted to showcase their abilities.

“This particular group of students has a lot of talent,” she said

Himes said her favorite part of the program is teaching the students to honor other people.

“It’s not about who’s performing on the stage, but who we’re lending the stage to,” she said.

Around 100 people gathered at the Woodland Cemetery on Friday, at the eleventh hour of the eleventh day of the... read more