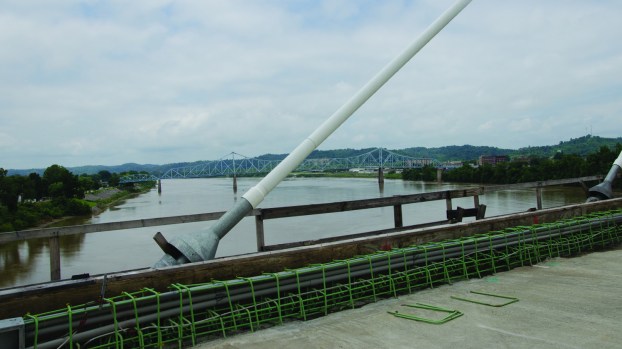 Heath Harrison/The Ironton Tribune The old Ironton-Russell bridge is seen from the deck of the new bridge connecting the cities in this July 7 file photo. The new bridge is set to open Nov. 23, at which point the old bridge will be closed immediately to traffic.

Old Ironton-Russell bridge to close to traffic on Nov. 23

The opening of the new Ironton-Russell bridge is a little more than a week away and that date will also mark the closure of the current bridge to traffic, Ironton Mayor Katrina Keith says.

The opening of the new span will feature a parade of vintage cars and a ceremony, set for 11 a.m. on Nov. 23. The parade will travel across the new bridge, starting on the Ohio side, and then will cross the old span and will be the last passenger traffic to make the journey over the cantilever bridge, which has been in service since 1922.

“Once the parade crosses, that’s it for the old bridge,” Keith said.
Kathleen Fuller, spokesperson for the Ohio Department of Transportation said there will be several speakers, including U.S. Rep. Bill Johnson, R-Ohio, to speak at the ceremony which will feature a ribbon cutting and a chance for people to walk across the new span before it opens to vehicle traffic and watch the parade.

She said organizers are planning several surprises for the ceremony as well.

For the parade, Fuller said organizers are seeking cars prior to 1960 and have spoken to several local car clubs. Anyone with a vintage vehicle who would like to participate should call the mayor’s office or ODOT’s Lawrence County garage, she said.

They are also seeking individuals who have historic ties to the old bridge and its opening. Anyone with information is asked to get in touch with the mayor or ODOT, Fuller said.

Fuller said the new bridge should be open to regular traffic later in the day, after the festivities end.

Construction on the new $81.3 million, two-tower, cable-stayed bridge began in 2012.

“It will be mostly prep work,” she said. “People won’t notice.”

She said in 2017, during late winter or early spring, the main span will come down. Rather than a detonation, it will be lowered into the river in sections over one or two days. Following removal of the span, the piers for the bridge will be detonated at a later date.

Ironton is home to the newest Tudor’s Biscuit World location, which is set to be up and running by the... read more