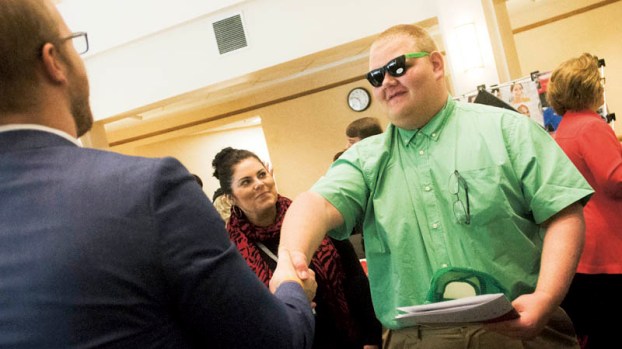 More than 100 applicants turned out Thursday for a job fair at Ohio University Southern.

The event was a partnership between Ohio Means Jobs of Lawrence County, the OUS Campus and Opportunities for Ohioans with Disabilities.

“We had an educational session to kick off the morning, with instructions and tips on hiring people with disabilities,” Cynthia L. Crews, a business sourcing agent with Opportunities for Ohioans with Disabilities, said.

She said, following the session, veterans and those with disabilities were allowed early admission to the job fair, followed by OUS students and the general public.

Inside, more than 30 potential employers, such as Marathon Oil, Verizon Wireless, CVS, Lowe’s and the Veterans Administration had booths set up.

Crews said it was the first fair in Lawrence County with a focus on veterans and those with disabilities, following a recent event in Scioto County. She said she hopes it will become an annual event for Lawrence County.

“Many employers stated it was the best job fair they’ve been to all year,” she said, noting they had received praise for the number and well-preparedness of applicants. “One said they were going to interview four people next week, and another will be interviewing seven,” she said.