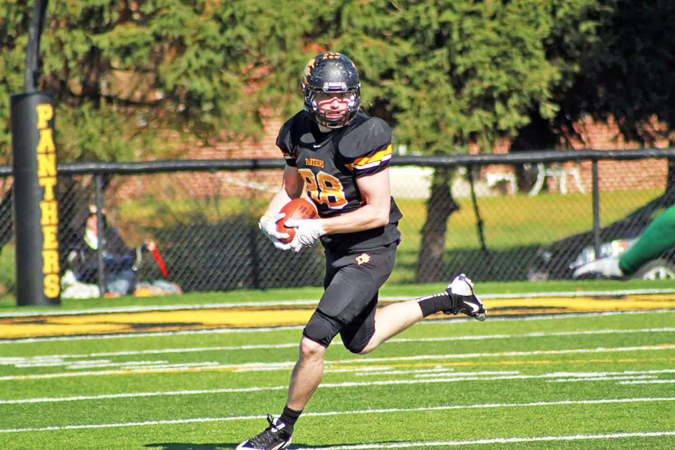 COLUMBUS — One thing Aaron Stephens can say about his football experiences in high school and college: He had an award-winning career.
After winning several awards to end his career with the Ironton Fighting Tigers, Stephens signed with the Ohio Dominican Panthers and ended that career with yet another award.
The 6-foot-3, 215-pound Stephens was named All-Great Lakes Intercollegiate Athletic Conference honorable mention after a stellar senior season.
“The first I heard of it was on twitter but I didn’t think I made any team,” said Stephens. “It’s always good to get acknowledged like that. It’s my first so I’m obviously proud.”
Stephens was a four-year letterman and started all 11 games his senior year. He pulled extra duty as the Panthers’ longsnapper.
This past season he had 25 receptions for 267 yards and five touchdowns with all five scores coming in the last six weeks of the season as ODU finished 7-4.
Stephens had two touchdowns against Northern Michigan and he had 86 yards and a score against Walsh.
“We were a young team. We had to learn. A lot of guys will be back. I was about the only one who started on offense who won’t be back,” said Stephens.
As a freshman, Stephens was a member of the ODU team that won the GLIAC championship.
Stephens earned letters all four seasons and then enjoyed an outstanding senior years and was named All-GLIAC honorable mention.
A 2013 graduate of Ironton, Stephens earned first team All-Ohio honors as a defensive end while also playing tight end. He was the Southeast District Division IV Defensive player of the Year.
“Not a lot of guys have won things on both sides of the ball. That kind of stands out for me,” Stephens said.
Besides football, Stephens was the starting center on the Ironton basketball team that reached the Division III state semifinals. He was also the starting first baseman in baseball.
Aaron — who is the son of Tammy (Rowe) and Clark Stephens — is majoring in middle school Math and Social Studies Education.
“I want to help kids get better prepared for the next level,” said Stephens.