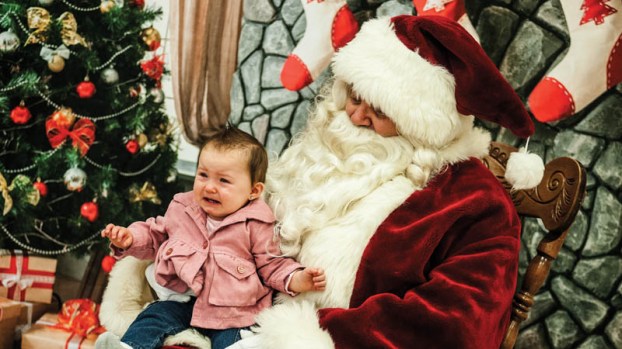 WILLOW WOOD — Hundreds turned out Saturday morning to get a head start on the Christmas season, when the annual Breakfast With Santa took place at Symmes Valley High School.

The event, organized by the school’s band boosters, gave attendees a chance to have breakfast with pancakes, sausage and drinks and an opportunity to speak to Santa and get pictures.

A rink was set up, where children could skate in their socks, and a Frozen Wonderland offered them a meeting with Elsa, Anna and Olaf from Disney’s “Frozen.”

MacKenzie Wise, of the 10th grade, portrayed Elsa for the event.

“It was awesome,” she said of the interaction with the children. “They were all awestruck and were so nice.”

Several vendors were set up, including Jennifer Jefferson, of Catlettsburg, who was selling Lula Roe leggings.

Chelsea Grace, 11, of Pedro, was selling string art, in which she took old barn lumber and stenciled a design on it, then put nails in the pattern.

“We wrap the string around it,” she said.

Her mother, Julie Warren was selling flagposts nearby.

“We sold them at the PTO event,” she said. “They auctioned so well, we decided to try here.”

She said she hopes to sell more on the Tri-State Pickers Facebook page.

Tracy Hurn, the president of the band boosters, said all proceeds from the event, which was organized by the group, as well as band students and parents, would go toward the band program. They had a record turnout for this year, she said.

This past Thursday, Care 24/7 opened its doors for an open house and ribbon cutting for a new resource center... read more