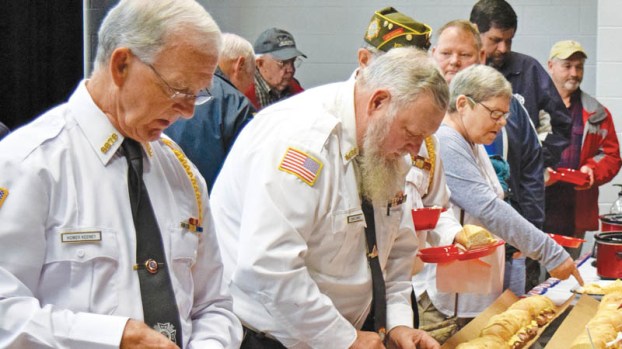 Members of Proctorville VFW Post 6878 and local veterans are served lunch by members of Chesapeake Middle School’s student council at a veterans program at the school on Friday.

Veterans Day may have been last week, but the tributes are still going on.

Due to a scheduling conflict, Chesapeake Middle School was unable to host a program on the holiday, but on Friday, they invited local veterans to the school to be honored.

“This actually worked out and helps with turnout to have it today,” Beth Wireman, the school’s eighth grade history teacher, who organized the event, said.

More than 30 veterans, who were invited by students, took part in the event.

“We sent forms home, asking if they knew a veteran or had a veteran in their family,” Wireman said.

The veterans sat in from of the school, while members of the Proctorville VFW post 6878 brought in two flags.

Following the pledge of allegiance, student Emily Schwamberger sang the national anthem. Then, members of student council read a history of the holiday and thanked the vets one by one.

Poems were read in their honor, and the student body stood from the bleachers and filed past the vets, shaking hands and thanking them for their service.

One of the service members on hand was Shaden White, a 2016 Chesapeake graduate who is now in the army.

He said the service of the veterans made it possible for students to enjoy freedoms.

“It’s good for them to remember what has happened in the past and why they have what they have,” he said.

Wireman said the event served as a civics lesson.

“It teaches the importance of serving your country and being a good citizen,” she said.

Following the program, the student council served a lunch, prepared by the school’s teachers, to the veterans.

‘We Are Family’ to raise funds for Recovery Point programs

Speaker to be Candy Finnigan from A&E’ series ‘Intervention’ HUNTINGTON — In the Tri-State, we are family. With alcohol and... read more