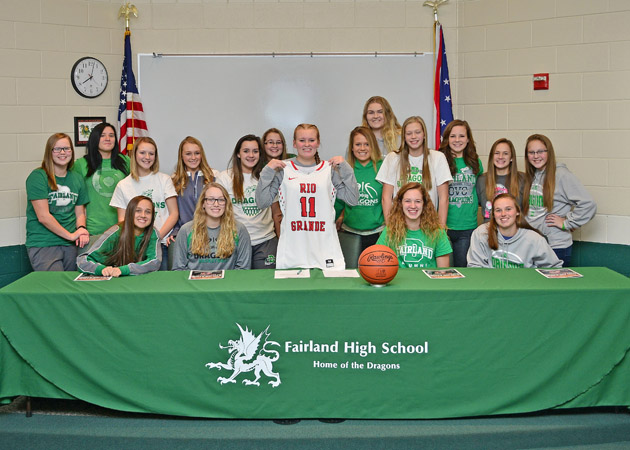 Fairland Lady Dragons’ senior guard Issy McKinney signed a letter-of-intent on Monday to play basketball at the University of Rio Grande. McKinney holds up her Rio Grande jersey while being surrounded by her basketball teammates as they helped celebrate the milestone. (Kent Sanborn of Southern Ohio Sports Photos)

PROCTORVILLE — They both got what they wanted.
Fairland Lady Dragons’ senior guard Issy McKinney wanted to play college basketball. The Rid Grande RedStorm wanted a shooter.
It couldn’t have worked out any better.
McKinney’s shooting ability and Rio Grande coach Dave Smalley’s need for a shooter clicked and thus the marriage happened as the 5-foot-8 senior guard signed to play next fall with the RedStorm.
“I just didn’t want to stop after my senior year. I got a lot of playing time and I didn’t want to stop,” said McKinney.
“They want a shooting guard. I play every day in practice and then after practice. It just came up. (Rio Grande) was close and really convenient.”
Fairland coach Jon Buchanan said McKinney’s hard work over the summer improved her shooting and that attracted Rio Grande.
“She had a great summer. We’ve had kids who their senior year they really kind of blossom. What we saw from her this summer we though that could really happen,” said Buchanan.
“She’s a really good shooter. She’s potentially the second best shooter on our team behind Emily (Chapman). She actually has a good mind for the game.”
McKinney’s basketball IQ is just another intangible that will help her in the transition from high school to college.
“All of our teams have been good in the past about being a smart basketball team. She fits that mold. She’s easy to coach,” said Buchanan.
“If I bring her aside and say, ‘Issy, here’s what I see, here’s what I’m thinking,’ she kind of understands and that’s important to have that kind of smarts about you.”
Another item that McKinney wanted and Rio Grande had to offer was the right academic program. McKinney plans to get a Math major in education.
“They had what I wanted. I’ve wanted to teach since the sixth grade. I’m really good with numbers,” said McKinney.