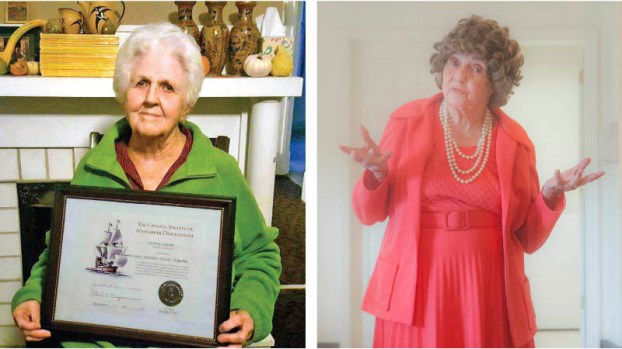 Left: Jeanne Francis Wagner, of Ironton, whose ancestry can be traced back to Mayflower passenger Thomas Rogers, holds a certificate from The Mayflower Society honoring her lineage. Right: Jean Fuller Butler, of Hanging Rock, portrays Eleanor Roosevelt. Butler is a member of Ohio’s chapter of the Mayflower Society.

Today Americans celebrate the Thanksgiving holiday, which traces its roots back to the harvest 1621 celebration at Plymouth, and descendants of those early settlers can be found in Lawrence County.

Jeanne Francis Wagner, of Ironton, moved to the area from Massachusetts in 1952.

“My husband brought me down here to meet his loving family,” she said, adding that they stayed when he took a job at the coke plant in Ashland.

Wagner is descended, on her father’s side, from Thomas Rogers, a Leiden separatist who, at the age of 49, traveled on the Mayflower with his son Joseph.

“He didn’t survive the first year,” she said of Thomas. “But his son did, and he married, had three daughters and it goes down the line from there.”

Thomas was a signer of the Mayflower Compact, but Joseph was too young to do so.

Wagner said she also has roots on her mother’s side, and that side of the family talked about the Mayflower lineage “all the time.” She said it was not unusual for people in Massachusetts to have ancestry on both sides.

Wagner said she still visits the state and is familiar with the Plymouth area.

“There are a lot of tourists up there,” she said. “It’s a very interesting place and a good place to bring children.”

With her ancestry confirmed, Wagner has received a certificate from the Mayflower Society of Massachusetts.

Chapters of the group exist in each state for descendents of the ship’s 102 passengers.

Another Lawrence County resident who can trace her roots to the Pilgrims is Jean Fuller Butler, a local historian from Hanging Rock.

Butler is descended from William Bradford, an English separatist who served as the Plymouth Colony’s governor for more than three decades and whose journal, “Of Plymouth Plantation,” has provided the most reliable historical information on the Pilgrims.

Butler, who portrays historical figures in her presentations to local groups and events, said she researched her family’s lineage.

“I’ve written a book about the Fuller family to 1400,” she said. “A cousin saw the book and took it back to the Mayflower.”

She found she is also descended Mayflower passengers John Alden and Priscilla Mullins.

“They have a lot of descendents,” Butler said of the couple, who had 11 children. One of their most prominent descendents was their great-great grandson, John Adams, who served as the United States’ second president.

Butler is a member of the Mayflower Society of Ohio, as is her daughter, Stella Willis, of Coal Grove.

The Mayflower Society estimates 35 million people worldwide have roots in the ship’s passengers, about 13-15 generations back for most. However, only a small portion of those have been able to document their lineage. Anyone who is able to verify their ancestry is eligible to join the group.