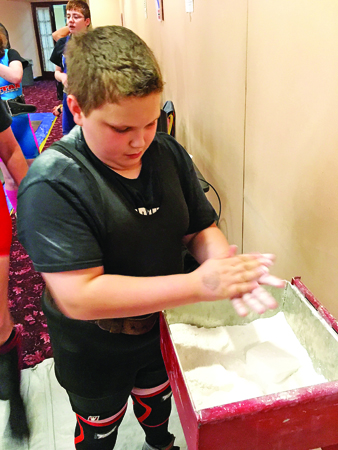 Bryce Maynard want to set a three-federation record in the squat of 137 kilos, but that didn’t happen when it was ruled he did not reach the proper depth on his attempts.
But that’s the only thing Maynard didn’t make happen.
The Ironton Middle School seventh grade student did set two more records en route to winning The World Natural Powerlifting Federation  world championship in a powerlifting meet held Nov. 11 in New Jersey.
Maynard was one of 31 athletes from seven different countries to compete in his age and bodyweight for the Raw Division.
The Raw Division does not allow any wraps, compression material suits or any aiding material.
In winning the world championship, Maynard set two World Championship Meet records for the WNPF in the dead lift and bench press that catapulted him into first place.
Maynard won the North American National Championship in July going against tough competition from Brazil, Guatemala, Canada, Russia, Chile and the Republic of Georgia.
The powerlifting world championship is the second by an Ironton resident. Larry Browning won a world title in the senior division.
With his title belt in hand, Maynard will now shift gears and focus on his Ironton Middle School athletic career in wrestling, basketball, quiz bowl, baseball and track.
He will then turned his attention to repeat as world champion beginning in April.

Buckeyes educated on history of rivalry