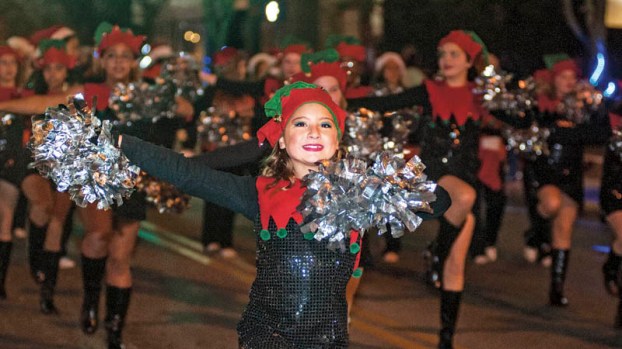 More than 400 take part in event

Crowds and families lined the streets of downtown Ironton on Monday for the city’s annual Christmas parade.

The annual event, organized by the Ironton Lions Club, started at Railroad Street and ran down Second and Third streets, passing attractions such as the Ro-Na Theater and Rotary Park along the route.

Following the procession of colors from the VFW, the parade was led by the Ironton High School majorettes, who danced to “Jungle Bell Rock,” played by the school’s marching band.
Floats could be seen from area businesses, such as Glockner, the Lawrence County CAO and Our Lady of Bellefonte Hospital.

Students of the Yvonne DeKay School of Dance and Cyndi’s Dance Studio performed among the floats, as well as the Rock Hill Elementary cheerleaders, the Ohio University Southern Community Band and others.

The parade wrapped up with a visit from Santa Claus, riding on a Jeep.

Lou Pyles, of the Lions Club, said the parade, which the group has organized since 1993, was bigger than last year’s event, something she attributed to the temperate weather for the night.

“It’s much better than last year, when it was raining,” she said.

She said the parade drew participants from as far away as Rarden, Ohio and Lesgae, West Virginia.