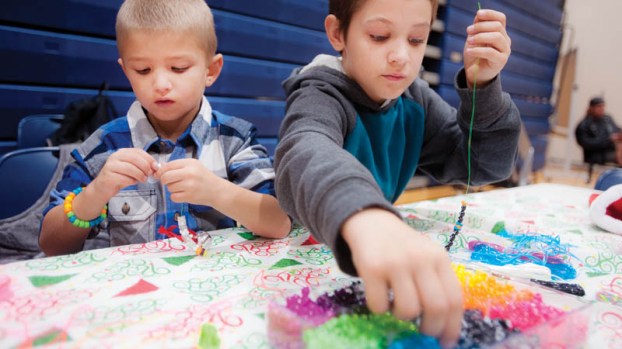 SOUTH POINT — The village of South Point got in the holiday spirit on Saturday, as crowds turned out for the second annual Christmas Extravaganza at the high school.
The event, organized by People for the Point, along with South Point schools, featured a pancake breakfast with Santa, vendors and crafters, craft activities for children, face painting, inflatables and a showing of the film “The Polar Express,” around which the event was themed.
“This is our second year, and it’s bigger this year,” Lisa Irish, the secretary for People for the Point, said. “It’s a bigger crowd.”
Irish said that many of the volunteers, decked out in elf outfits and other holiday costumes, came from the high school, who also provided the use of their facility and the bands and choir for the event.
One of the musicians was Chase Jobe, a sophomore at the school, who performed country music for the crowd.
Inside the vending area, artisans from across the region were selling their wares.
Kelly Gill, of South Point, had ornaments that she made as part a homeschool project.
“I’m selling candy,” Chris Gill, her brother, said. He had peppermints and chocolate on hand.
Bryan Burk, a South Point High School graduate who lives in Barboursville, had various items on display, all of which he made.
“I’m selling anything made out of wine bottles,” he said. “Lamps, wind chimes, hurricane lanterns. I cut the glass and do the etching.”
Burk also sells his items through his shop, Creatively Uncorked, on Etsy.
Sheila Kidd and Christy Wilson, of Ironton, have experience in crafting, but were trying something new.
“We’re selling earrings,” Kidd said. “ They start as perler beads, then go through a process, where they’re melted, then we add the decals,” she said.
Attendees to the event got a discount on admission, by bringing canned items, which will be donated to local food pantries.