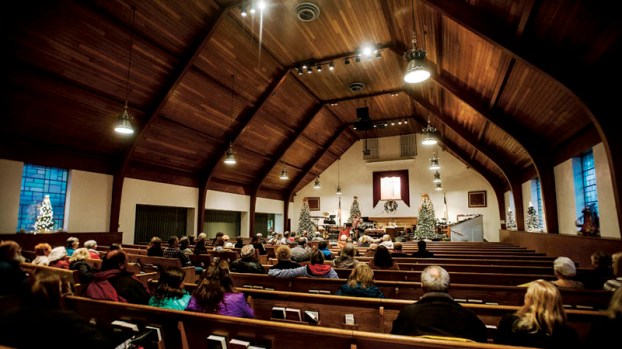 Inside view of First Baptist Church during the annual Candlelight Christmas Tour of historical churches Saturday.

Pastor Eric Barnes says the candlelight holiday tour of Ironton’s churches marks the beginning of a special time of year.

“I don’t know about you, but this really starts the Christmas season,” he said to those gathered at First Baptist Church, the first stop on the tour. “This really sets it in my mind.”

Outside, the Rock Hill High School band played as guests filtered into the church, where they were entertained by the congregation’s Praise Team, who played songs such as “God Rest Ye Merry Gentlemen” before Barnes’ remarks welcoming them.

“We are really what Christ is about,” Barnes said. “As a people who believe in God, we want to gather together, bring glory to him and invite others to join us.”

The church has served as the kickoff site for the tour for several years.

The group joined in for the singing of “Silent Night,” as they exited the church to head to their next stop.

This year’s tour took participants to eight historic city churches, of various denominations and faiths, where they took part in a 10-minute program at each.

The tour, organized by Debbie Rogers, of Ironton, has been going on for about 18 years, Kay Rader, a trustee with the Lawrence County Museum, said.

“When we’re finished, we all go to the museum for hot cider and cookies,” Rader said.

Barnes said the church walk is important because it gets people in the mood for what he says is the meaning of the Christmas season.

“Each church puts the mindset back on Christ,” he said. “That’s where it should be.”