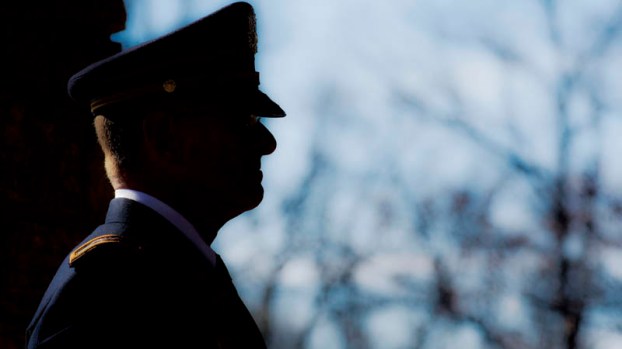 ASHLAND — On Wednesday, a group of people gathered at the Northeast Kentucky Veterans Cemetery to mark the 75th anniversary of an attack that drove the United States into World War II.

A memorial service took place in honor of those who fought and died during the Japanese bombing of the United States naval base at Pearl Harbor, Hawaii.

Delores Sarpas, of Grayson, Kentucky, organized the event at the cemetery, on the Boyd-Carter-Greenup county line, which drew a group of about 60 to the cemetery’s pavilion.

“I thanked the Lord this morning for the beautiful weather today,” she said of the sunny, temperate day for December. “And I’m thankful for the good friends who helped me with this,” she said.

Sarpas said she was only seven years old when the attack occurred, but the significance of the event became clear as she grew older.

“It affected me and all of us,” she said, stating she felt compelled to stage the event, at which all the presenters were either active duty or retired military members.

The surprise attack on Dec. 7, 1941 by fighters, bombers and torpedo planes of the Imperial Japanese Navy killed 2,043 Americans and wounded 1,178.

The fleet of eight U.S. battleships, stationed at the base, were all damaged, with four sunk.

Following the attack, President Franklin Delano Roosevelt requested and received a declaration of war on Japan. The next day, Japan’s Axis powers ally, Nazi Germany, declared war on the U.S.

Thursday’s ceremony began with the crowd standing for the presentation of colors, the pledge of allegiance and the singing of the national anthem by Tony Wilson.

The cadets marched around a table, set for five and stopped to place hats from all branches of the military at each place.

“The table represents all missing and action and killed in action in American conflicts,” McGlone said, as he detailed the meaning of each item.

“The single candle is symbolic of loved ones kept apart,” he said.

The lemon represented the bitter faith of those left behind, the salt stood for the tears of the families, the inverted glasses for those who were unable to toast and the empty chairs for those who are no longer here.

Following the words by McGlone, the cadets drew their swords, joining them over the table.

The keynote speaker was Ret. Col. Ralph Newman, who detailed the effets of the dates events.

“I was a wee tyke when Pearl Harbor happened, and I don’t remember the day,” he said. “But I remember, three years later, my dad departing for service in the army.

Newman said hearing of the experiences of his father and others around him who served had a profound influence on him.

“I think their influence probably ended up making me go into my career in the army,” he said. “As a young person, I hung on their every word.”

Newman told of the history of the day, from Roosevelt being interrupted during a foreign policy meeting to be told of the attack, to the drafting of the address to Congress, with its signature “a date which will live infamy” line.

“75 years later, most of the witness are no longer with us,” Newman said of those stationed at the base. “But the legacy of the men and women who defended Pearl Harbor will remain. It is a day that defined us.”

He said, just as the Doughboys of World War I inspired the soldiers at Pearl Harbor, those who served in World War II inspired many who came later, such as the first responders on Sept. 11, 2001.

“We saw similar courage and valor from those who entered those buildings, when instinct and logic would have compelled them otherwise,” he said.

Following Newman’s remarks, members of the Marine Corps League from Greenup offered a 21-gun salute and the playing of “Taps.”

Following the conclusion, Sarpas said the event was “beautiful” and thanked those who took part and attended.

“May God bless you and don’t ever forget Pearl Harbor,” she said.

Project uses reclaimed produce to help feed hungry As part of the Potato and Produce Project of the Society of... read more