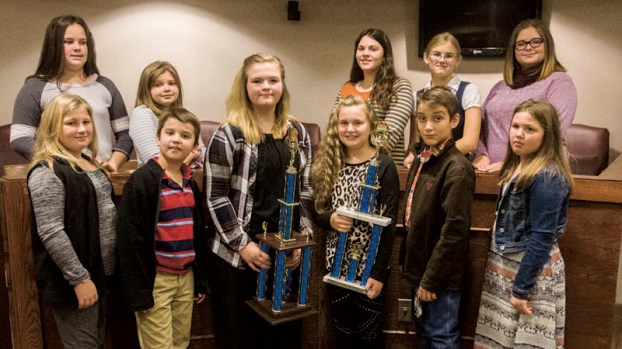 Karlie Fleeman, a seventh grader from Rock Hill Middle School, won the competition between 16 students, demonstrating her mastery of words from the Scripps National list.

Second place in the bee, organized by the Lawrence County Educational Serve Center, went to Danielle Leonard, an Ironton fifth grader, who lost on the word “bravura.”

After Leonard’s incorrect answer, Fleeman, to take the top spot, had to correctly spell “circadian.”

She gave the pronouncer, Doug Korstanje, of St. Mary’s Medical Center, an incredulous look upon hearing the word.

“I don’t think I studied that one,” she said, before giving it a try.

After thinking it through, she pulled it off and won the bee, at that point in its 13th round after an hour of spelling.

“It feels great,” Fleeman said after her win, remaining humble. “I didn’t even expect to get out of the first round.”

She said figured out the unfamiliar word by identifying its root components.

Third place in the bee went to Briar Call, a fifth grade student from Symmes Valley.

Leonard was also surprised to place so high.

“I hardly expected to make it this far,” she said.

In her second year of eligibility for the bee, which is open to fourth through eighth grades, she said she is hoping to try again next year.

All of the spellers in the bee are champions of their schools and are eligible to take part in the regional bee, set for March 18 in Athens, if they qualify after taking an online test.

Both Fleeman and Leonard expressed an interest in taking a shot at it.

This year’s county bee, which was comprised of students from eight school districts, was a wide open competition between newcomers, compared to the last few years, in which Emily Neal, of Chesapeake, and Holli Leep, of Fairland, alternated as champions. Last year marked the last year of eligibility for the two, now in ninth grade.

Third place in the 2015 bee went to Adam Fleeman, of Rock Hill, the older brother of this year’s champion.
At one point in this year’s bee, Karlie Fleeman was asked to spell “prairie,” and responded with a laugh.

“My brother got the same word,” she said.

From the regional bee, spellers go on to the Scripps National Bee in Washington, D.C., set for May 28-June 3.

The last student from Lawrence County to advance to the national bee was Felicity Jenkins, of Symmes Valley, in 2010.

Will serve in transition, on Transportation Landing Team Ironton native Brigham A. McCown has been named to the Trump transition... read more