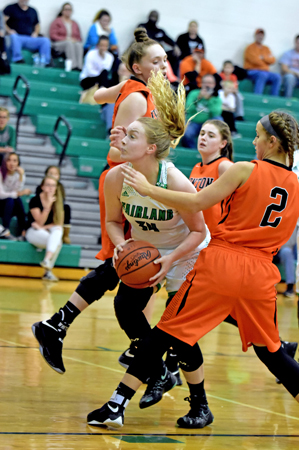 PROCTORVILLE — It was a key match-up that turned into a prize fight.
The Fairland Lady Dragons and Ironton Lady Fighting Tigers stood toe-to-toe on Thursday in an Ohio Valley Conference early season showdown, and it was the Lady Dragons who won the decision 49-41.
Much like the Apollo Creed vs. Rocky Balboa movie fights, Fairland took a 10-point lead in the first quarter before Ironton came off the canvas to take a halftime lead.
But Fairland came out punching with a pivotal third quarter to take a 15-point lead, then withstood another barrage of blows by Ironton before hanging on for the win.
Lady Dragons’ coach Jon Buchanan said keeping the punches coming with their pressure — especially in the third quarter — was the key.
“They had some turnovers against our pressure. They stepped on our sidelines three times in four possessions,” said Fairland coach Jon Buchanan.
“Emily (Chapman) is a great player, but I thought we had some kids step up and make some plays.”
Chapman scored 13 points to go with 5 rebounds and 2 steals as Fairland (3-0, 2-0) remained unbeaten.
But the Lady Dragons got key contributions from Taylar Wilson with 10 points and Alesha Simpson with 6 points and 5 rebounds.
“I thought Alesha’s 3 at the end of the first half was big. They got a five-point lead and we’re kinda like ‘man, are we going to go into halftime with our tail tucked between our legs’ and Alesha makes that 3 and then comes down on the next possession and gets fouled and makes one of two from the free throw line and we go down one with the ball coming out (to start the second half,” said Buchanan.

Jim Walker jim.walker@irontontribune.com ASHLAND, Ky. — The streak is no more. The Rock Hill Redmen put an end to the... read more