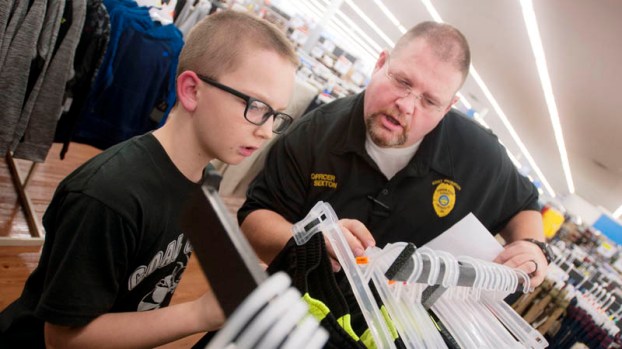 Shop with a Cop aids families in need

SOUTH POINT — Dozens of children in need got a helping hand from law enforcement on Monday.

Shop With a Cop took place at the South Point Walmart, and officers from the Lawrence County Sheriff’s office, the Ohio State Highway Patrol and villages throughout the county filed into the store, each assigned a family to assist.

Lawrence County Sheriff  Jeff Lawless said the purpose of the event is to “give kids hope.”

“It’s to let them know that law enforcement is their friend,” he said. “We know it’s a difficult time of year for families to put food on the table and to buy presents for children.”

Lawless said the effort was coordinated with local schools, who submitted the names of children. Recommendations from individual officers also came.

“Many of them have been on a call, and have seen a child who needs help,” Lawless said.

Each child was allotted $250 to go shopping in the store.

“We’d better get necessities first,” Chesapeake Police Chief Randy Lewis told the children he was assisting.
Before the children got to the much-awaited toy department, they first shopped for clothing, bedding and other needed items.

Lewis, who was sworn in as Chesapeake’s interim chief in September, said the experience was new to him. He tried his best to help a girl pick out a pair of shoes.

“This is my first time,” he said, noting that he had been serving in the middle east for six years before coming to Chesapeake. “A lot of things are new for me.”

The effort was paid for through donations, funds left over from last year’s event and sponsorship from Spectrum Outreach Services, Robin Fowler of State Farm Insurance and Dynegy.

“They jumped in and really helped us out,” Mahjer said. “They made this program possible.”

In addition to the officers, several area students helped out, such as the Ironton High School bowling team.

Two students who drew the attention of children with their colorful elf costumes were Skylar Chinn and Reece Duncan, who could be seen posing for pictures.

Following the shopping and checkout, the families were each given a food basket, then the officers took the children to the nearby Ponderosa, where they were treated to dinner and a meeting with Santa.

Lawless told the officers that they plan to work to boost the program for next year, including bringing back the apple butter sale by law enforcement to help raise funds.

“It’s a lot of hard work, but it generates a lot of money,” Lawless said of the day set aside to make the apple butter. “But this isn’t about me or about me or the sheriff’s department. It’s about coming together as a community and doing something good.”

SOUTH POINT — A South Point man is being remembered for his longtime commitment to education and the community. Donald... read more