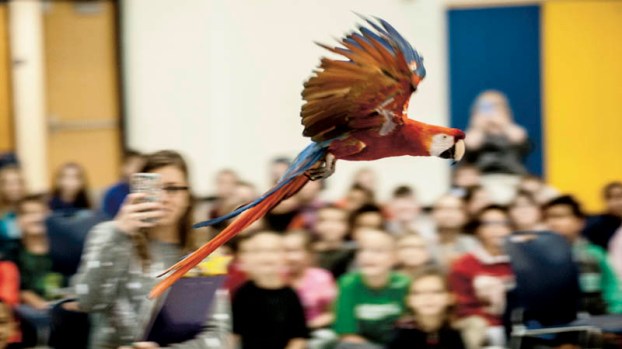 A scarlet macaw parrot flys to her handler Thursday afternoon during a Columbus Zoo exhibit at South Point Elementary.

SOUTH POINT — The Columbus Zoo paid another visit to South Point Elementary on Thursday, bringing with them a new line-up of animals for this school year.

The theme of the show was “Habitat Heroes,” and students got a chance to see animals from a variety of environments.

The presentation began with Tuna, a Penguin from southern Africa, who waddled freely down the aisle between the students.

Price said a penguin normally walks about 2-3 miles per hour, but is faster in water.

“He can go 10 miles per hour when chasing fish,” she said.

She said a penguin’s coloring helps it to hide from predators, with it’s white underbelly blending in with the sky when viewed from underwater, and it’s black back merging with the color of the sea floor when seen from above.

She said all of the zoo’s penguins are named after the types of fish they like to eat.

When released, the bird flew majestically between two perches, one positioned in front of the students and another behind them.

Price said the hawks hunt cooperatively, with one bird scaring prey in to the open, while another retrieves it.

“Once they catch something, they share it with all their friends,” she said.

Boyes then asked for two student volunteers, but said they had to be comfortable with “creepy, crawly” things.

A boy and girl were selected and then each presented with a Madagascar hissing cockroach, which they were asked to carry through the crowd and show to the students.

Next, the students were introduced to one of the zoo’s newest residents – Perry a prehensile-tailed porcupine.

Boyes said that, although many see porcupines shoot their quills in cartoons, it’s a myth.

“They need to back into or hit the sides of an animal,” he said, also noting that this species of porcupine raises its quills, showing the yellow color at their base as a warning to predators.

The students saw one animal native to their own region, a skunk.

“They don’t want to use their natural defenses unless they have to,” Price said of the animal’s notorious smell. “They first give a warning to a predator.”

She said skunks aim for the eyes of those hunting them and that their spray can also act as an irritant.

An animal native to the rain forest was on hand, and the children watched a macaw parrot fly over them, using its long tail feathers to steer.

Then, Boyes carried a ball python through the crowd.

Native to shrublands, the snake coils into a ball as a defensive posture.

Price said that in ancient Egypt, members of royalty would wear the live reptiles, typically not threatening to humans, as jewelry, either around their arms or as headbands.

Finally, the presentation wrapped up with a serval cat, which Price described as “a Frankenstein cat,” due to its large ears and the fact that its back legs were longer than its front ones.

This enables the cats to leap to catch prey, as the children saw, when it jumped straight up, nearly eight feet in height, to get at a toy on a stick.

Boyes and Price spoke of the need for conservation and protecting habits, and Price said the students had already contributed in a way to the effort, as the cost of the zoo’s visit would go toward their mission.

Price said she works on site at the zoo in the summer months, and, for the rest of the year, tours with the animals.
She said she and Boyes visit schools, senior centers and other facilities throughout Ohio and West Virginia in able to do outreach.

“We’re connecting the public with wildlife any way we can,” she said.

Look for more photos in this Sunday’s Focus section of The Tribune.

Shop with a Cop aids families in need SOUTH POINT — Dozens of children in need got a helping hand... read more