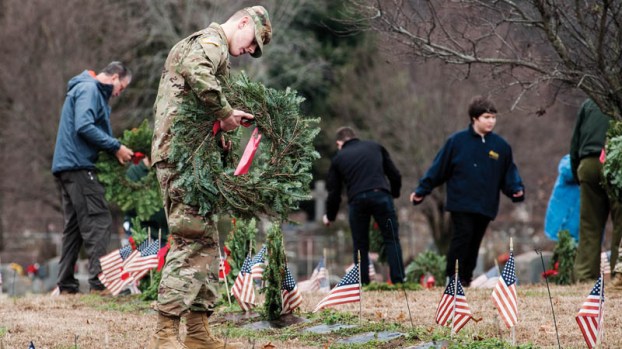 Nearly 100 people gathered at Soldiers’ Plot for the annual Wreaths Across America event, honoring soldiers buried at Woodland Cemetery.
The event, organized by the group’s local chapter, paid tribute to those who served, as 700 live evergreen wreaths were laid on the graves in the veterans section, where 1,200 soldiers are buried. The plot holds those killed in action and those who died after coming home from conflicts dating from the Spanish-American War to the present.
Following the raising of the flag and the playing of the national anthem, the event’s keynote speaker, Chaplain LTC Wes Balmer, who serves as deputy command chaplain for the United States Army’s John F. Kennedy  Special Warfare Center and School at Fort Bragg, addressed the group.
Balmer, a city native, who went into the service one year after his 1987 graduation from Ironton High School, said Wreaths Across America has a three-point mandate.
“Remember, honor and teach,” he said, stating that he hoped to address all three in his remarks.
“We come here today to remember fallen United States veterans,” Balmer said. “For them, deployment to some global hot spot was met with a swagger that came from their training.”
He said that none buried there expected to die on a battlefield.
“But they died for a cause for which they believed,” he said. “In the heat of battle, the scope of concern narrows for soldiers, who stand ready to protect themselves and those next to them.”
He said there are no easy answers why some did not return from their service.
“Even as I thought about this, theologically, as a chaplain, I do not know why some lived and some died,” Balmer said. “I ask you to view skeptically the pastor who says it was part of God’s grand design why Joey lived and Jimmy died.”
He recounted his own experience while serving in the Middle East, in which another chaplain died, while he lived.
“But God’s plan for Wes was in there somewhere,” he said.
Balmer said we should think about how to engage with veterans in a way that is appreciative of their service.
“Ask that person you know who served, ‘What was the best part of your service?” he said.
He said, for most, the answer would be the camaraderie that formed between soldiers.
“I have made some of the best friends of my life during service — nothing in the civilian world compares to that sense of mission,” he said. “If you served, you were given the great gift of singularity of purpose.”
He said the best way to remember those who have fallen is in continuing the mission.
“When deployed, it’s about staying alive and keeping your buddies alive,” he said.
But, upon return, he said it is to focus on the values of community, family, marriage and spirituality.
He said it also important to teach children the value of service and to value freedom for themselves.
“Ask ourselves first, ‘Are we using freedom for something good?’” he said. “Freedom is not an end. It’s a means to an end. You and I can use this space to do everything God’s calling us to do.”
Following Balmer’s remarks, a wreath was hung for each branch of the military, as well as for POWs and those missing in action.
Then, members of the crowd, which included family and friends of the soldiers, the Boy Scouts, the American Legion Riders, members of the Ohio National Guard Recruitment Sustainment Program, and people from the community, began placing the wreaths on the graves.
Following the decoration of the graves in Soldiers’ Plot, the group marched to Patriots’ Point in the cemetery and hung one more wreath for all who served in Vietnam.
The local chapter of Wreaths Across America conducts the service every year. The wreaths, which will remain on display throughout the holidays, are paid for through donations. In addition to wreaths for Soldiers’ Plot, community members were given the opportunity to purchase additional ones for graves located elsewhere.
Balmer, who still visits Ironton a few times a year, said being invited to speak was a great honor.
“I was really jazzed to do it,” he said. “And I have a few of my friends from high school here today taking part.”