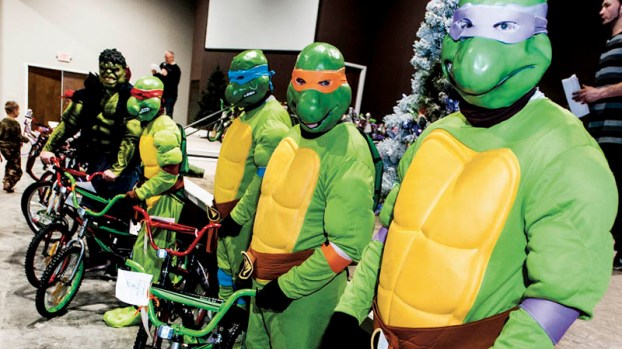 SOUTH POINT — About 200 children and their families were lined up on Saturday afternoon at Tri-State Worship Center for a much-awaited holiday event.

“When you come out, you’ll be on wheels,” one member of the church told the children.

They were in line for the sixth annual Christmas bike giveaway, organized by John Dickess, of Dickess Auto Repair, and Don Schwartz, of Advance Auto Part in Ironton.

The bikes, donated or paid for by members of the community, were lined up and newly-assembled in the church sanctuary, ready to be distributed.

“We’re getting ready to turn them loose for the food,” Schwartz said of the sea of children, forming at the door of the room at 3 p.m..

First, they were treated to a pizza party and meeting with Santa, where they received additional presents.

While donations had been slow this year, the group had collected enough for their 200-bike goal for the year.

The distribution has taken place in downtown Ironton the past five years, but for 2016, the event was moved to the larger space of the church, where Dickess is part of the congregation.

“We’re helping to facilitate things this year,” Pastor Terry Wagner said. “We try to provide whatever John and Don need.”

The church has taken part in the past giveaways, volunteering to help at the events and collecting donations.

For this year’s giveaway, they sold food baskets to help raise funds.

For those who would still like to donate, the group will keep accepting bikes until Christmas.

The local school’s provided organizers with a list of children in need, and the group also advertised, seeking local cases.